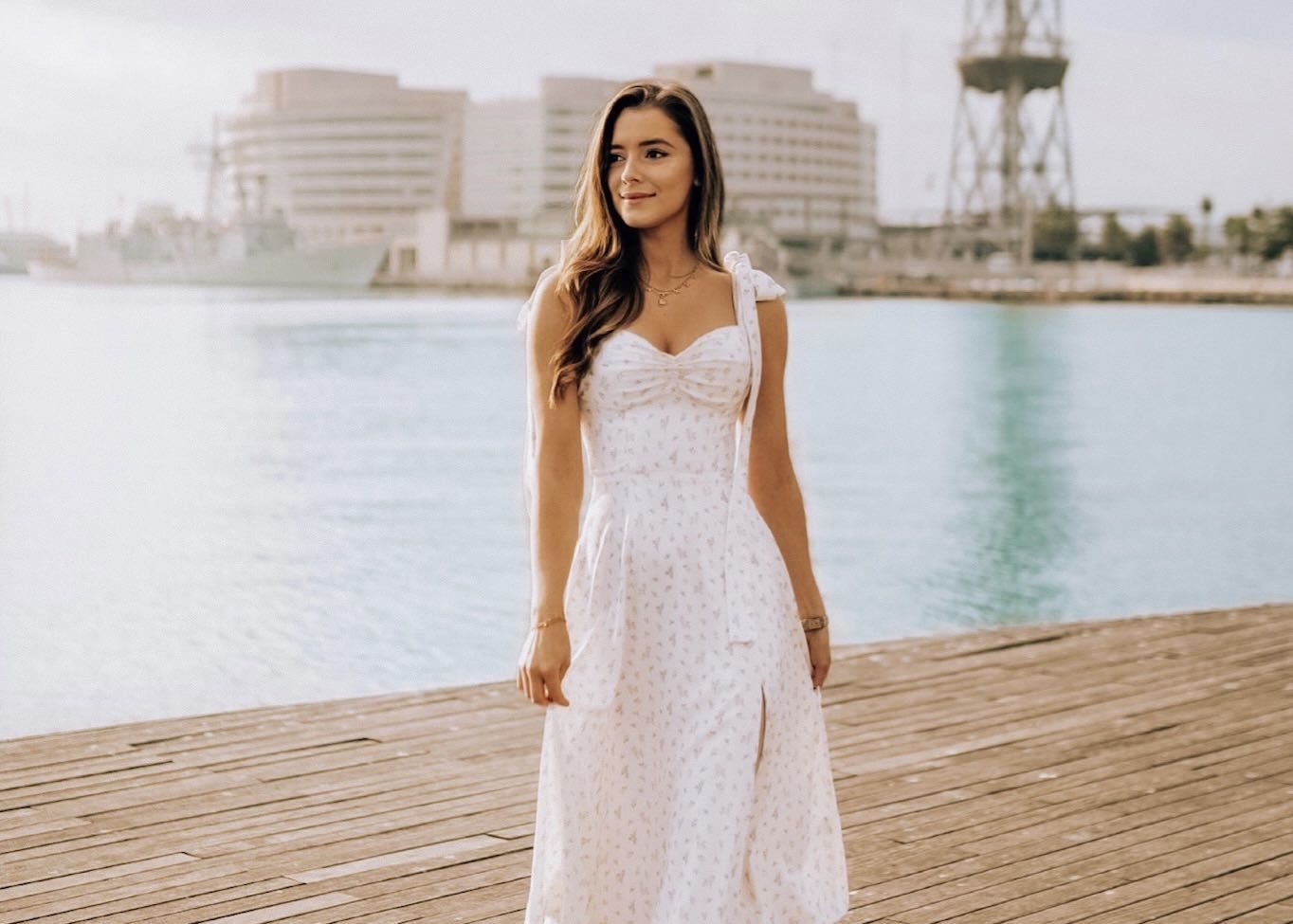 Ah Barcelona, a beautiful Spanish city that’s bursting with life. The beaches in Barcelona are truly special, but can often be overlooked by travellers due to the plethora of other things to do in and around the city. With three gorgeously golden miles of coastline, a visit to Barcelona is calling out for some beach time.

So yes, there really is even more to Barcelona than ‘just’ being the much-loved Catalonian heart of delicious food, crazy architecture and abundant gardens. With the best beaches in Barcelona you can expect deep azure waters dazzling in the sun, relaxed play zones for fun and amusement whatever your age, and outstandingly golden sand.

Whether you’re after Med-side volleyball, tapas on the sand, or supping Sangria on a sun lounger, here is my pick of the best beaches in Barcelona.

I feel I have to start with Barceloneta as it is the best known beach in Barcelona, and with good reason. It is, in terms of character, the Miami Beach of Spain. Expect pumping crowds of beachgoers, entertainment in the form of incredible people watching, and lots and lots of fun to be had on this 400m+ stretch of golden sand. If it’s a quiet beach that you are after, this isn’t it!

Barceloneta Beach, which is named after a very old fishermen’s neighbourhood, is still the place to come for the best seafood tapas. Indeed, some of the city’s best food, full-stop, is found right here. You can literally wander up to a beach hut which is serving paella that looks most delicious to you.

There won’t be much sitting still at Barceloneta. Expect to partake in water sports galore. But if you do take to sunbathing then expect an audience!

Nestled between Nova Icària and Mar Bella, Bogatell is often listed as one of the best beaches in Spain.

Youngsters tend to flock to the livelier spots, leaving Bogatell with an older average age of visitors. The result is a remarkably tranquil feel for a city beach. However, don’t underestimate Bogatell for fun and vibrancy. You’ll find volleyball and ping pong, and plenty of willing locals ready to include you in their game. You can enjoy kitesurfing here too.

Bogatell is notoriously clean – all 600m of it. It was effectively re-created in the lead-up to the 1992 Olympic Games and even had sand brought in from Egypt! There are plenty of lifeguards to keep you safe (or provide the eye-candy) and there are lots of kiosks dotted along selling ice-cream and other edible treats.

If the intensity of Barceloneta is too much for you and you’d rather seek out a quieter Barcelona Beach, then consider Nova Icària. This family-favourite beach covers another 400m of Barcelona coastline, and is a Blue Flag awarded calm beach.

Nova Icària is popular with families, particularly those with little ones. The waters here are safe and calm for cooling down. It may have a distinctly chilled out feel but there’s actually lots for families to do here. There’s a playground as well as volleyball and ping pong. The water fountains provide lots of entertainment too. If you’re looking for more to do then Port Olimpic is next to it, with tonnes of water-based fun.

A well-serviced beach, Nova Icària has lifeguards as well as full facilities including showers and toilets. There are various concessions but you can also go to nearby Passeig Marítim de la Barceloneta for more substantial refuelling.

Not to be confused with the southern Spanish resort for the rich and famous called Marbella, Mar Bella is a wonderful beach in Barcelona.

Clocking in at over 500m long, Mar Bella, another Blue Flag beach, is to the north of the city centre. As such, it doesn’t suffer from quite such extreme crowds as other Barcelona beaches. It’s a great place to escape the hard-sell beach vendors that you can sometimes experience when trying to enjoy one of the busier beaches, particularly at the height of the season.

There is a lot to do here including paddleboarding, kayaking and windsurfing. On the beach you’ll find the near-mandatory volleyball. While up on the promenade you’ll discover a perfect spot for rollerblading and skateboarding or scootering.

Be warned that Mar Bella is a beach in two parts: one half is family-friendly complete with children’s playground, the other half is clothing optional.

Just to the north of Mar Bella is Nova Mar Bella which too clutches Blue Flag status. This is a wonderful tranquil beach with a large slide popular with children. It sits between the Selva de Mar and Bac de Roda breakwaters. The beach is family friendly but it’s quiet and calm, perfect for a day of unwinding on the sand and dipping in the sea.

It may be a tranquil beach but there are actually plenty of amenities here, including rentals for umbrellas and loungers, showers and lifeguards. There are also a number of concession stands ready to serve you whatever takes your fancy.

Nova Mar Bella is another beach that benefited as part of the 1992 Olympic Games rejuvenation project.

The backdrop to Sant Sebastià isn’t exactly one of the prettiest beach backdrops. But with 1,100 metres of sand and fun bordering the Med, and within walking distance of Barcelona centre, it’s worth your attention. Expect a busy vibe, with a similar feel to Barceloneta. Indeed, if you’re heading here in the summer then head onto the sand early to secure your spot for the day.

With sailing, paddleboarding, windsurfing and other water-based activities, there is plenty to keep the active members of your party busy. Those with mobility issues are also well-catered for here with volunteer-organised amphibious chairs. When your stomach starts rumbling, there are often food vendors wandering meaning you don’t even need to get up!

Somorrostro has a fascinating past. It was once home to what could only fairly be described as a shantytown. Now, it is undoubtedly one of the most picturesque beaches in Barcelona. Now known for its high-end luxury culture, it showcases how redevelopment can work wonders. Indeed, you’ll find that it’s right next to some of the most opulent Barcelona restaurants and boutiques.

Somorrostro covers 520m and can be found near the infamous Gehry’s Golden Fish statue and it leads up to the Moll de Marina Pier. Central to the beach you can find Centre del la Platja (yes, literally Centre of the Beach). It’s a venue that offers all sorts of events ranging from environmental talks to games and activities for kids.

Sitting tightly between Sant Sebastià and Barceloneta, Sant Miguel kind of morphs as part of these two characterful beaches. Centrally located, Sant Miguel is another Blue Flag Barcelona beach. It tends to attract those determined to sunbathe without break. That said, any Brit who has tried to sunbathe with the best of the Catalonians and Spaniards knows that a break will be needed! No problem, head to Plaça del Mar if you’re in need of shade and refuelling.

For me, Llevant is one of Barcelona’s loveliest beaches. It might be new, only created in 2006, but expect a palm-tree clad 375m stretch of golden sands. It even manages to hide its enormous (and convenient) parking facilities. It’s quiet and relaxing but I love the open vistas. It’s also great because, as yet, it’s not bursting with the same intensity of amenities as the big brothers such as Barceloneta. Barceloneta and Sant Sebastià are perfect for an energised vibe, but sometimes we all want something a little more relaxed.

Here you’ll find all the basics you need such as toilets and lifeguards, as well as umbrella rentals. However, there aren’t a tonne of eateries.

Llevant is also great if you’ve got your pooch in tow. There’s a section of the beach cordoned off for dog owners which even features a drinking trough and dog showers!

Technically outside of Barcelona itself, many will say that Castelldefels is nonetheless one of the best beaches in Barcelona. Just 20 minutes by train south of the city, here you’ll find a whopping 5 kilometres of golden sand and azure waves. Popular with kite surfers and with windsurfing and sailing schools dotted around, there’s something to keep you busy.

Here you’ll find slightly more natural beauty than you tend to find with the city beaches, with a wonderful view of Parc Natural del Garraf. Nonetheless, there are lots of beach shacks for food options and the promenade is great for a leisurely amble or cycle.

Another beach just outside of Barcelona is Ocata. Quite narrow, it’s a good beach for keeping an eye on little kids!

Ocata can be found 12 miles north of Barcelona in the town of El Masnou and offers the idyllic feel that is impossible to get with a city beach. It takes about half an hour to get to by train.

Despite being out of Barcelona, it rivals many of the Barcelona beaches for good food with lots of tapas bars and waterfront restaurants.

If you want a Barcelona beach holiday then I recommend doing two centres and including Sitges, which is just 35km away but includes 17 different beaches! There’s something for everyone here, from the vibrant Platja de la Ribera to the family-friendly Platja de la Fragata.

Have you visited any of these gorgeous spots? Let me know which is your favourite Barcelona beach in the comments or get in touch on social media.

If you’re visiting this beautiful city, browse hotels in Barcelona or book a sightseeing tour.

20 best things to do in Barcelona