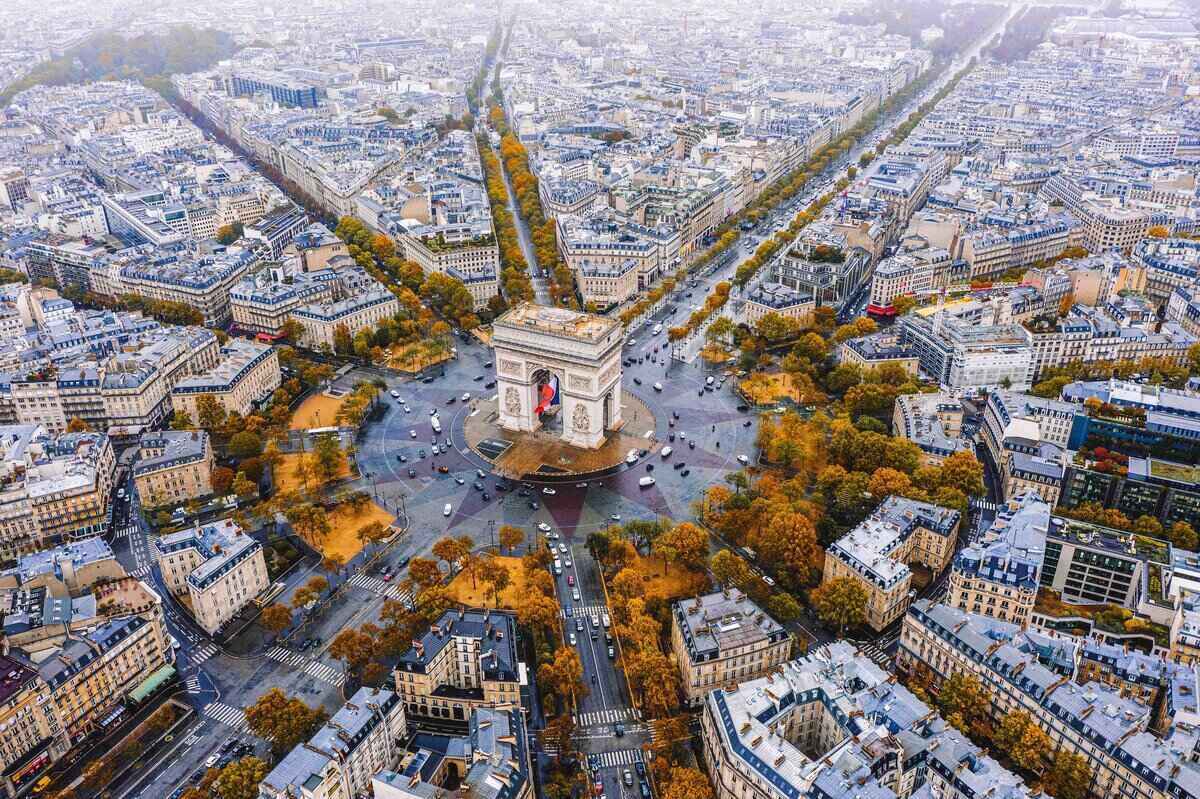 There are so many things to do in Paris that the only problem can be choosing which to prioritise during your stay. But help is at hand!

This list of 20 of the finest Paris tourist attractions should help you work out where to spend your time. Whether you want to shop until you drop or absorb all the available art and architecture.

Paris attractions range from famous sights like the Eiffel Tower, Louvre, Pompidou Centre and Moulin Rouge. All the way through to lesser known places to visit in Paris, such as the subterranean catacombs, a selection of palaces and peaceful parks, and the best spots to eat, drink and shop at.

From Paris for first-timers to as yet undiscovered corners for regular visitors, this guide covers the top 20 things to do in the capital of France.

20 of the best things to do in Paris, France

As the most visited museum on the planet, the Louvre is a must on any to-do list for the French capital. Immortalised in the Da Vinci Code, this Paris museum and art gallery is also an iconic and historic monument. It is consistently ranked as the top museum in the world.

While it’s most famous as the home of the Mona Lisa, there are plenty of other notable artworks to marvel at when wandering around the Louvre, housed in part of a former Parisian palace.

Pro tip: Don’t forget to look up – the Louvre’s ceilings are just as breathtaking as the artworks.

You haven’t really been to Paris if you haven’t visited the Montmartre area, the city’s highest point. This arty quarter is also home to the Sacré-Coeur, the Roman Catholic Basilica of the Sacred Heart of Paris.

Simply wandering around Montmartre can be fascinating in itself, and there are plenty of quirky boutiques and cafes to stop at. You can also still see artists at work as they vie to paint your portrait.

Pro tip: In this case, look down. The best views over Paris can be seen from Montmartre.

Nestled between the Louvre and the Place de la Concorde is the Jardin des Tuileries. It is so-called due to the fact that a Parisian tile factory once occupied the site. During summer there is a fairground, while the ponds and Musée de l’Orangerie can be enjoyed all year round.

This lovely outdoor space in central Paris is a typical example of a French formal garden. It was landscaped by King Louis XIV’s gardener André Le Nôtre.

If your taste in art leans more towards the contemporary than the Old Masters, a visit to the Palais de Tokyo should be included on your list. Architecture fans will also be wowed by the building itself, constructed for the Paris International Exhibition in 1937.

The Palais can be found in the16th arrondissement of Paris, directly opposite the Trocadéro. The Musée d’Art Moderne de la Ville de Paris occupies the eastern wing.

5. Have steak frites at Bouillon Pigalle

In the Pigalle neighbourhood, this local bistro serves up traditional French fare at astoundingly good value prices. The steak frites here are practically a Parisian legend. Believe me, the Maître d’Hôtel butter that accompanies it is to die for.

You don’t have to go for beef, though. Whether you fancy trying escargots or confit duck or hanker after simple roast chicken or slow cooked lamb, this is the place to be. With a relaxed, welcoming vibe and no-nonsense prices, dining at this bistro in Pigalle can be one of the best things to do in Paris.

You’ll probably have to queue to get in, but it’s well worth the wait.

If it’s your first visit to Paris, then this landmark is probably number one on your list. Whether you secretly hope to witness a proposal at the top or want to swoon over the city spread out below, snapping selfies at the pinnacle is practically obligatory.

As you might expect the tower is always busy, so book ahead online and do arrive early if you can. If you’d like to see the Eiffel Tower from the outside, here are some of the best viewpoints:

Pro tip: For a different perspective on the Tour Eiffel, take a romantic boat trip along the Seine by night, when the illuminated tower looms over the river.

If you feel like picking up some vintage clothing and accessories or would love to snap up a genuine piece of antique French furniture, then head to Les Puces during weekends or on a Monday.

With about 2,500 stalls, this sprawling market in Saint-Ouen is the biggest in Paris – both in terms of size and reputation. Each weekend around 150,000 shoppers descend on ‘The Fleas’, so do secure your valuables and arrive as early as possible.

The Palace of Versailles is actually around 12 miles from central Paris, so it makes a great day trip when you want to escape the metropolis. With stunning gardens and parkland as well as the vast, stately building, it’s well worth the trek.

Highlights inside and out at this landmark UNESCO World Heritage Site include the Museum of the History of France, the Hall of Mirrors, the King’s apartments and the Grand Trianon.

Discover a lesser seen side to the French capital by going underground. Anyone with a penchant for the weird, wonderful or downright macabre will be fascinated by the fact that these subterranean tunnels are the final resting place for around six million people’s remains.

The catacombs were created from former quarry tunnels and are 20 metres below ground. The entrance lies in the 14th arrondissement, and as they’re packed with skulls and other human bones they’re not for little ones – or the faint-hearted.

Built during the early 19th century, the Arc de Triomphe stands proudly at the end of the Champs-Élysées, the smartest and most famous thoroughfare in the whole of Paris.

Now known as the Place Charles de Gaulle, the former Place de l’Étoile is known for the dozen avenues that lead from it as well as the commemorative and photogenic arch. At almost two kilometres long, the Champs-Élysées is widely regarded as one of the world’s most beautiful avenues.

Pro tip: The Champs-Élysées is home to numerous designer boutiques plus several museums, so do allow enough time to visit these if you want to.

11. Walk along the Seine

A stroll along the banks of the Seine is not only one of the most romantic picks when considering what to do in Paris, it also gives you the opportunity to get a feel for the city while admiring Paris landmarks old and new.

The river’s banks are actually a UNESCO World Heritage Site, and it’s recommended that you commence at Gare Austerlitz. Sights to take in as you wander along include the Notre-Dame, the Pont des Arts, the d’Orsay museum and quay, and of course the Eiffel Tower.

On the Rue de Rivoli, La Favourite provides a pretty setting in which to enjoy breakfast, brunch, lunch, dinner, supper or snacks. Though the service receives mixed reviews at times, the food is good and the location superb.

It is also decorated by Deschamps Florist, and the abundance of fresh flowers gives the brasserie an elegant feel. It’s arguably one of the most Instagrammable cafés in Paris. Dishes range from small plates to larger portions, and include the likes of pizza, poke bowls, salads and casual French specialities like Croque Monsieur and Madame.

Nicole Kidman’s role as Satine really shone the spotlight on this famous and somewhat risque French venue. Red lights, dazzling performances and the pure theatre of the place are among the attractions. The Feerie show is an unforgettable spectacle awash with glitter and brightly-coloured feathers.

Located in Pigalle and close to Montmartre, exploring both districts before dinner and a show makes for one of the most memorable days you could spend in Paris.

Spread over three storeys, the Merci concept store sells designer threads and stylish homeware in a spacious, glass-topped building. This was formerly a fabric factory.

If you want to pick up an unusual souvenir or a unique outfit, then a visit to ‘Thank You’ in the Marais district is well worth your while.

This former Royal Palace is free to enter and close to the Louvre, so it’s a great attraction to add to your Parisian itinerary. Dating from 1633, it was the French royal residence prior to the completion of the Palace of Versailles.

Over 250 striped columns in black and white decorate the courtyard, and have, over time, become a symbol of the city. There are also peaceful gardens featuring modern sculptures and futuristic architecture.

The Île de la Cité is an island on the Seine, slap bang in the centre of Paris. This compact area boasts far more than its fair share of attractions, including the Pont de l’Archevêché and the Pont Neuf, and of course the more recently fire-ravaged Notre Dame.

It’s a delightful place to be by day or night, for picnicking, listening to the musicians who wander among the crowds or simply stopping by during a stroll along the banks of the Seine.

Love it or loathe it, there’s no arguing with the fact that the Pompidou centre has a striking facade. This Paris museum is famous for its colourful exterior pipework and escalators. It is also the location of the National Museum of Modern Art.

If you want to see artworks by the likes of Picasso, Warhol and Matisse, the Pompidou Centre’s vast collection dating from the 20th century and beyond will satisfy. There are also sweeping views over Paris from the top floor, as well as a library, gift shop and ever-changing array of exhibitions.

Whether you prefer a colourful, tropical style cocktail or a drier, more understated drink, Le Syndicat serves some of the finest and most unique blends to be had anywhere in Europe and beyond.

A team of expert mixologists are on hand to ensure the good times roll, and can also advise on your selection. An authentically French feel, a hip hop soundtrack and coloured lights add to the atmosphere of this cocktail bar. Located in an up-and-coming neighbourhood near the Gare du Nord.

With an ornate sage green, cream and gold dome announcing its presence on the Champs-Élysées, Ladurée is a Paris institution where sweet treats are the order of the day.

If you want to sample macarons during your stay this is the place to do it. Discover a magnificent setting featuring striped and duck egg blue soft furnishings, an intricate grandfather clock and lots of gold detailing. Even the ceiling is an absorbing work of art.

Often touted as the prettiest garden in the whole of Paris, the Luxembourg Garden was created by Marie de’ Medici in 1612. It can be found where the Latin Quarter meets the Saint-Germain-des-Prés in the 6th arrondissement.

The 25 hectare site contains both French and English gardens, with a sizable pond and forest dividing the two. There is also a rose garden, apiary and orchard, plus rides for kids, and games like chess for adults to play.

A visit to Paris is a must for any Europe bucket list. This is by no means a comprehensive list of things to do in Paris, but these are my top picks. Do you have any favourite attractions or things to do in the city of love? Let me know in the comments or get in touch on social media.