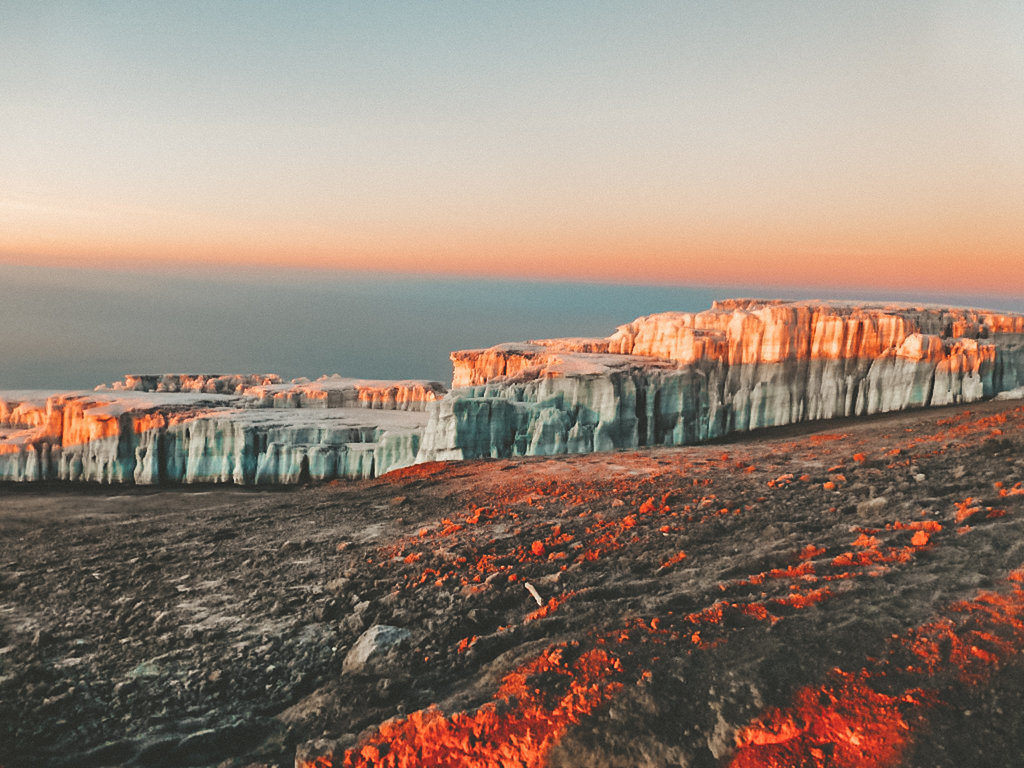 One day, back when I was at university, I was having a particularly dull day. I was fed up with studying and seeking some form of excitement. So, on a mad whim, I spontaneously signed up to climb Kilimanjaro and agreed to raise £2,500 for charity in six months. I’m sure my friends and family thought I was having an end-of-teenage-years crisis but I was determined to fulfil this ambitious goal, albeit a spontaneous one.

Raising the money proved much harder than I had ever imagined. Efforts involved baking hundreds of cupcakes, coercing my lecturers into buying Krispy Kremes and copious begging. When I got truly desperate, I tragically let all of my beanie babies go in a tombola at the local summer fair. They were dark times indeed!

But sure enough, with lots of support and some generous donations, I raised all the money. So now for the big challenge itself – climbing Mt Kilimanjaro, the highest free-standing mountain in the world.

Climbing Kilimanjaro was a truly incredible experience with lots of highs and lots of lows. But in the end, every tear, every ache and every stinky toilet was worth it.

I hope you enjoy reading about my Kilimanjaro adventure. Perhaps my experience inspires you to take on your own spontaneous challenge.

There are various different routes you can take to reach the peak of Kilimanjaro. The route you will be on depends mostly on the company and guides you go with. Be sure to do some research on the various routes to make sure you’re happy with what’s in store. Some routes are quicker but have less time for acclimatisation. So if you’re worried about altitude sickness then you may be better off with a longer route.

Our group took the Machame route. It’s one of the quicker ones, as we spent only six days on the mountain. The Machame route is the most popular but also the toughest climb. Still, it’s not too difficult and is ideal for those on more of a budget and for those who want some really impressive views.

The Machame route first eases you in with a gentle rainforest hike. This was by far the easiest day.  In fact, it was rather pleasant!

Yep, that’s right, the porters set up our very own Kilimanjaro restaurant. Table set, tea at the ready and lunch prepared! We thought we were in for the easy ride!

The rainforest was stunning, full of buzz and life. The towering height of the trees made me feel very small – in a good way.

There were about 30 porters to our group of 10 and they are genuinely amazing people.

Yes, that guy is carrying two bags, a loaf of bread and three chairs ON HIS HEAD. And they carry these all the way to base camp.

We arrived at camp to find our tents all set up and waiting for us, before sitting down for dinner. Meals generally revolved around carbs and more carbs. Potatoes, rice and veg. Plus, a whole lot of popcorn to start with.

Now I know what you’re thinking. This Kilimanjaro lark all looks like a bit of a breeze – bags carried, tents set up and food prepared!

Sadly, it did get harder. I promise.

The second day got progressively more difficult with a steep climb; but the views certainly made up for the struggle.

This is the first time we broke through the canopy, revealing the most spectacular views. My head was quite literally in the clouds!

The vegetation became more and more sparse until we were greeted with a somewhat dismal arrival at Shira camp. Engulfed in the clouds and super cold, this was our first glimpse at how harsh the mountain can be.

Thankfully, by morning the cloud had cleared and we were treated to a gorgeous sunrise.

We were above the cloud line and completely cut off from the world below. The apocalypse could have been imminent and we wouldn’t have known. A strange, unsettling and wonderful feeling all at the same time.

The hike to Lava Tower

The next couple of days of my Kilimanjaro climb were full of highs and lows (quite literally). Day 3 was acclimatisation day. This means that we hiked all the way to 4,600m only to come back down again. This all sounds a bit pointless but it’s one of the most important days. It helps your body acclimatise to the altitude so you’ll (hopefully) feel less unwell when it comes to tackling the peak.

No longer any enchanting towering trees, the surroundings comprised solely of boulders and not much else.

We finally reached lava tower at an impressive 4,600m. This was the first time that we really struggled as the altitude sickness began to kick in. It was also freezing and the clouds enveloped us in a blanket of cold greyness.

We then began the descent to Barranco Camp where we would be spending the night. I never imagined that descending would be so tricky! Twice as hard as walking uphill, the descent was a bit of a struggle. My overpowering headache was worsened by the ever encompassing clouds that continued to engulf us, accompanied by freezing cold hail and then rain.

We finally arrived at Barranco Camp and I headed straight to my sleeping bag for a nap. In doing so, I sacrificed afternoon tea (yes, British tradition is just as important up Kilimanjaro!) and popcorn. However, the sleep cleared my headache and I felt significantly cheerier, much to the delight of my fellow climbers. Finally the clouds cleared, and once again, the views did not disappoint.

Next morning, we woke up to the daunting but exciting prospect of climbing Barranco Wall.

To give you an idea of the scale, if you look at the below picture really closely, you’ll notice a few small coloured dots slightly right of the centre of the picture – they’re people!

Despite the horrible afternoon I’d had the previous day I was so excited at the prospect of climbing a giant wall. This was the stuff I’d signed up for! Sure enough, I loved every minute.

After a good couple of hours of climbing we finally reached the top of Barranco Wall. Here we were met with the perfect photo spot…

Trekking to base camp

The rest of the day wasn’t quite so fun. It involved lots of ascending and descending combined with sparse landscape and unfriendly clouds. The trek was long and seemed to go on forever.

We finally arrived at Barafu Hut at an imposing 4,600m. We struggled through dinner in nervous anticipation of tackling the peak in only a few hours time.

Two members of our group decided not to attempt the summit while the rest of us psyched ourselves up. Here I am sitting on a rock and pondering what lies ahead…

… and boy did a hell of a journey lie ahead.

The crucial moment of my Kilimanjaro climb had finally arrived: conquering Uhuru Peak. After only two hours sleep, we were woken at 11pm Friday night to have, um, breakfast. A combination of nerves and altitude meant that most of us struggled to eat the milky porridge. So I settled for a cup of tea and three ginger biscuits.

Filled with a mixture of dread and excited anticipation we prepared for the journey ahead. For me, this consisted of putting on every single piece of clothing I had with me and listening to some motivational tunes. We set off at midnight in total darkness and in temperatures of -20 degrees celsius.

Below is an extract from my diary, which I think is the most effective way of conveying how I felt about the climb. Please excuse the abrupt literature, it’s safe to say that I wasn’t in the best frame of mind…

Worst night of my life!!! Freezing. Could not drink; water froze. Could not eat; food froze. Headaches and sickness felt by all. No oxygen to breathe!

Evidently, it wasn’t the most enjoyable journey and I promise you the intention is not to put you off. Because believe me it was worth every second.

After six and a half hours of walking ‘pole-pole’ (very slowly – standing still was enough to make you breathless), we reached the peak. I swear I must have been sleep-walking for part of it because I can honestly say that it only felt like a couple of hours. Or perhaps my brain chose to block it out. Guess I’ll never know!

Watching the sunrise from the summit of Kilimanjaro has got to be the most emotional and amazing experience of my life. Incredible views of stunning glaciers and the immense crater. Our guide put his arm around me and said, ‘You are so strong, strong as a lion’. I don’t think I’ll ever forget that.

I think the pictures can do the talking now.

After taking our photos at Uhuru Peak we quickly descended to get away from the effects of the altitude. For the descent, we had to literally ski down, sliding our feet down the scree.

Eventually we arrived back to base camp at 9am to get some well deserved sleep. Unfortunately, I still didn’t sleep but this time it was because the tents were so hot – there’s no pleasing me! We had lunch at 12.30pm then started the next part of the descent.

Finally, we arrived at Mweka camp at 5pm. Sadly, it wasn’t over for me…

What not to do when you climb Kilimanjaro

I realised my GoPro camera had detached itself from my bag at some point on the descent. I was beside myself because it had all of my footage on it. So in a state of utter delusional exhaustion, I made the highly questionable decision to hike 1,000 vertical metres back up the mountain in an attempt to find my GoPro and the precious footage.

Two rather unhappy porters accompanied me. It was dark half hour into our climb. And I was the only one of the three of us who brought a head torch. Still, I was a woman on a mission. We trekked for nearly five hours. I never found my GoPro.

It still breaks my heart to this day knowing that I’ll never have the footage from my climb.

After an unsuccessful search, I couldn’t stomach any dinner and I settled for the most comforting cup of tea I’ve ever had. I was sick from exhaustion.

With a good sleep and a hearty breakfast, the next morning I could begin to appreciate our achievement. We sang and danced with all the porters and guides to celebrate. There were smiles all round – I wish I could bring the happiness and energy from African dance back to England in some form. I think we could all benefit tremendously from it!

On Sunday afternoon we arrived back at our accommodation in Moshi where we were given our certificates.

Climbing Kilimanjaro was an experience that I will never, ever forget. Lots of lows but lots of incredible highs, it was worth every second. I guess one day I’ll have to do it again so I can get that footage I so wanted!

If you’d like any advice, would like to share your own experiences of Kilimanjaro, or just want to say hi, then I’d love to hear from you in the comments or on social media!