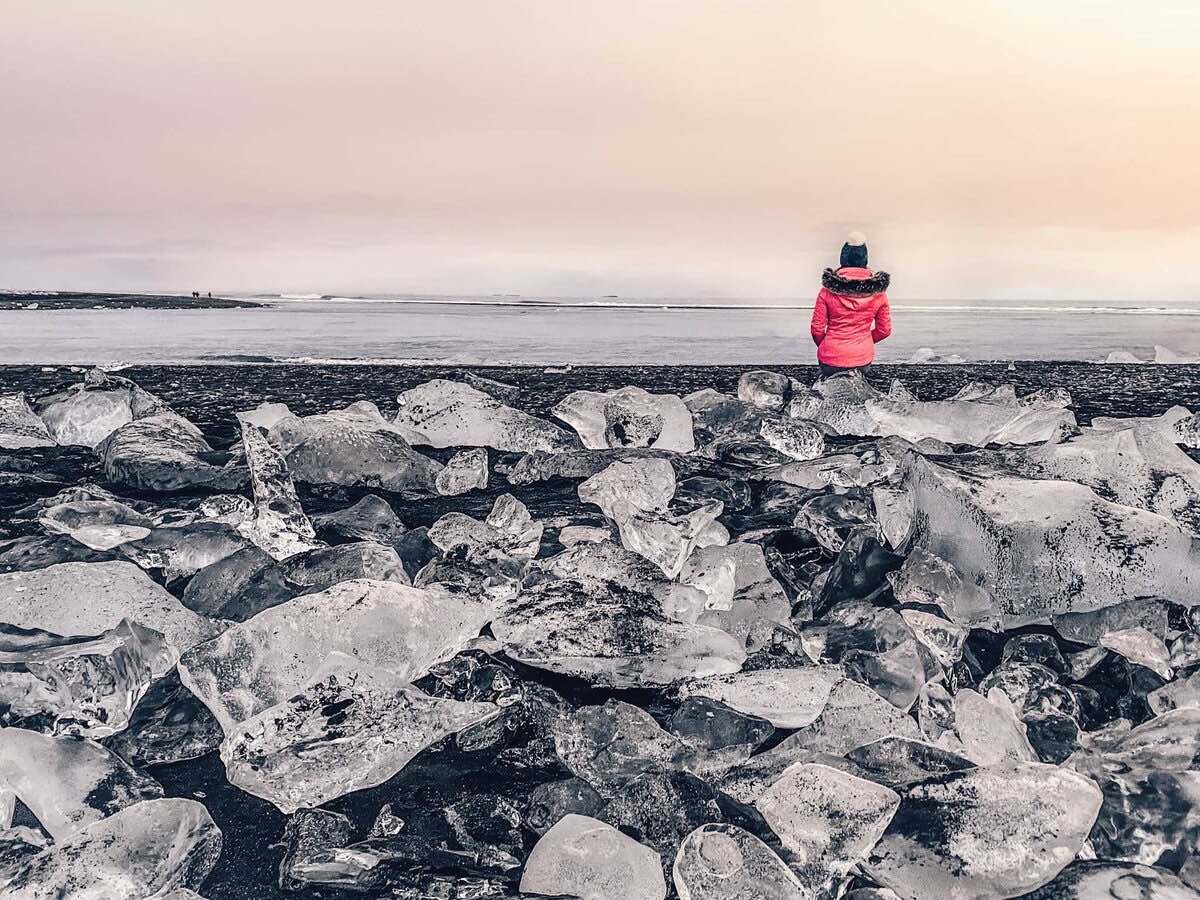 Visiting a black sand beach in Iceland is a must for many travellers who visit the Nordic country at the top of Europe. Spending time at one of the spectacular black sand beaches of Iceland can lead to the best photo opportunities of your holiday. Especially where chunks of glacial ice or an abandoned plane wreck provide a stunning contrast.

What causes a black sand beach in Iceland?

The sand is black due to Iceland’s widespread volcanic activity, and was once red hot lava. When a volcano has erupted, the lava is quickly chilled and solidified by hitting the icy waters of the ocean. Over time, this has broken down into sediment – or the distinctive black sand.

The six beaches featured in this guide each have their own charms, and all are dramatic and compelling. Featured in the Game of Thrones series, Reynisfjara boasts towering rock stacks, while at Dyrholaey a rocky ‘bridge’ stretches out to sea. Diamond Beach is famed for the chunks of glacial ice that wash up on the shore. While Solheimasandur and Djúpalónssandur are home to plane and shipwreck remains, and Stokksnes has ‘Batman mountain’ as a backdrop.

The best time of year to visit does vary, but the depths of winter is often best avoided due to icy roads and the likelihood of storms. I visited Iceland in November, when there was a gorgeous golden glow reflecting off the waves all day. Where weather may be of prime importance, this is mentioned in the section for the beach concerned. The same applies to safety warnings, which we’ve also drawn attention to under each heading. In general, steer well clear of the water and heed any local advice.

It’s worth noting that several of these beaches are close together, making it simple to visit two or more during one trip.

Reynisfjara black beach is without doubt Iceland’s most famous. Once voted one of the best beaches to visit in the world, it is famed for the distinctive stacks of rock that stand in the sea, close to the shoreline.

The chance to see these dark basalt stacks –Reynisdrangar – is one of the reasons why visitors head here. Back on land, the coastline is also fringed by the dramatic, dusky peaks of and around Mount Reynisfjall. Parts of Game of Thrones series seven were filmed here, with the brooding landscape acting as a striking backdrop.

The Reynisfjara beach location may also contribute to its popularity, as it is situated just 112 miles (180km) from the capital, Reykjavík. It is positioned close to Vík í Mýrdal, a small fishing village on the south coast of Iceland, and is easy to reach from the Icelandic Ring Road (also known as Route 1).

In the interests of safety, visitors should be aware of the powerful, crashing waves that can occur at Reynisfjara beach. Keep at least 30 metres (100ft) between you and the sea, and always face the ocean so the ‘sneaker waves’ can’t catch you out. Swimming isn’t advisable either, due to rip currents that have in the past been fatal.

Location: Near Vík í Mýrdal on the south coast

Where to park: Car park in front of cafe and toilets

Diamond Beach in Iceland forms part of the Breiðamerkursandur glacial plane. In Iceland, this black sand beach plane makes a particularly stunning sight when large chunks of ice wash up on the beach, contrasting most photogenically with the black sand beneath.

Hence the name, the icy rocks look like rough diamonds scattered across the shore. Lovers of wildlife also flock to Diamond Beach to see the resident seals, or to spot black and white killer whales or orcas in the ocean.

While Diamond Beach is safer than Reynisfjara, visitors should still consider the dangers posed by the large fragments of ice and freezing cold water. The former should never be climbed: they have sharp edges and slippery surfaces, and could either be pulled out to sea by the current or flipped over by the tide.

Hypothermia has also caused problems in the past, and there are huge fines for anyone who tries to swim here. While in the area, don’t miss Jökulsárlón ice lagoon – it’s just 250 metres from Diamond Beach.

Location: Near Jökulsárlón ice lagoon on the south east coast

How to get there: Drive from Reykjavík in about 4.5 hours, via Route 1

Where to park: Car park next to Diamond Beach

Fans of sci-fi will not want to miss Solheimasandur black sand beach. It’s famous for a wreckage that occurred here in 1973, when a US navy plane crashed onto the black sands. Fortunately all survived, and the plane has been left exactly where it landed. The remains make for some fabulous photo opportunities.

As with Diamond Beach and the chunks of glacial ice, it’s the contrast of the faded white plane against the black sands that really gives this location its dramatic atmosphere. If you can visit at sunrise or sunset, the images created are absolutely breathtaking.

In the past, people used to drive right up to the plane, but this has now been prohibited for safety reasons. Even vehicles with four wheel drive could become immobilised by the soft, yielding terrain. Keeping the area free of cars also helps to protect local flora.

The weather can pose a challenge here, during winter in particular, as there can be deep snow. At any time of year, visiting is not recommended during windy weather as you could be struck by a sandstorm.

Location: Near Jökulsá river and Vík í Mýrdal on the south coast

Where to park: Car park just south of the road

Stokksnes black beach is found in south east Iceland, and is home to the Vestrahorn mountain. Its majestic peaks rise to around 450 metres (1500ft) above sea level. Due to its shape, it is sometimes referred to as ‘Batman Mountain’. There is also one of Iceland’s best black sand beaches here.

The lofty peaks rising up behind the blue waters of the lagoon, fringed by the black sands, make for unparalleled photo opportunities. This is an unspoiled and entirely natural landscape, formed by the movements of the earth over lengthy periods of time. When the weather is calm, some impressive reflections are often visible in the water.

Jökulsárlón ice lagoon is around an hour’s drive from Stokksnes, so it’s worth planning to visit Diamond Beach while in the area if you also want to see that. Note that an entry fee is payable at Stokksnes beach, as the site is privately owned. At the time of writing this is about USD $6.

Location: Near Höfn on the south east coast

How to get there: Drive from Reykjavík in about 6 hours, via Route 1, or fly to Hornafjordur

Where to park: Car park by the Viking cafe

Dyrholaey black sand beach lies to the west of Reynisdrangar. As with those brooding basalt stacks, there is an interesting rock formation stretching out to sea here. Dyrholaey was once an island, and the name literally means a hilly island with a doorway.

The rocky finger-shaped peninsula here is still joined to the land, and its steep, dark cliffs drop dramatically to the ocean below. An almost perfect arch has been formed at the bottom, curving gently as the waves crash below.

Summer is the best time to visit Dyrholaey if you want to see the resident birdlife. Puffins and arctic terns nest here. But stay well clear of the latter as they can become aggressive if feeling threatened. There is also limited beach access during nesting season (normally during May to June) so you will need to walk a little further if visiting then.

Again, Dyrholaey is near Vík í Mýrdal, so you can visit Solheimasandur, Reynisfjara and Dyrholaey in one trip.

Location: Near Vík í Mýrdal on the south coast

Where to park: Upper and lower car parks – upper may close during nesting season

Now uninhabited, Djúpalónssandur beach in Iceland was once a fishing village. The beach is a gracefully curving sweep of black sand, framed by rugged cliffs. Now it is known for the lifting stones here.

These stones comprise four large, rounded pebbles that vary in size. They were formerly used to test the strength of the fishermen before they went out to work on the sea. The Icelandic name of each stone roughly translates as ‘useless’, ‘weakling’, ‘semi strong’ and ‘fully strong’.

The rusting remnants of a shipwreck from 1948 can also be seen on the beach; the vessel involved was a trawler from Grimsby. While five survived, 14 died and the relic remains as a monument to those who lost their lives.

As at Reynisfjara, Djúpalónssandur experiences strong currents, stormy waters and those ‘sneaker waves’. So keep your distance, particularly during inclement weather.

Location: On Snæfellsnes peninsula on the west coast

How to get there: Drive from Reykjavík in about 2 hours and 45 minutes

Where to park: Car park and toilets at western end of peninsula

Visiting the black sand beaches of Iceland are a true Europe bucket list experience. Have you been to any of these otherworldly beaches? Let me know in the comments or get in touch on social media.

Guide to visiting the Blue Lagoon

Guide to visiting Iceland in November