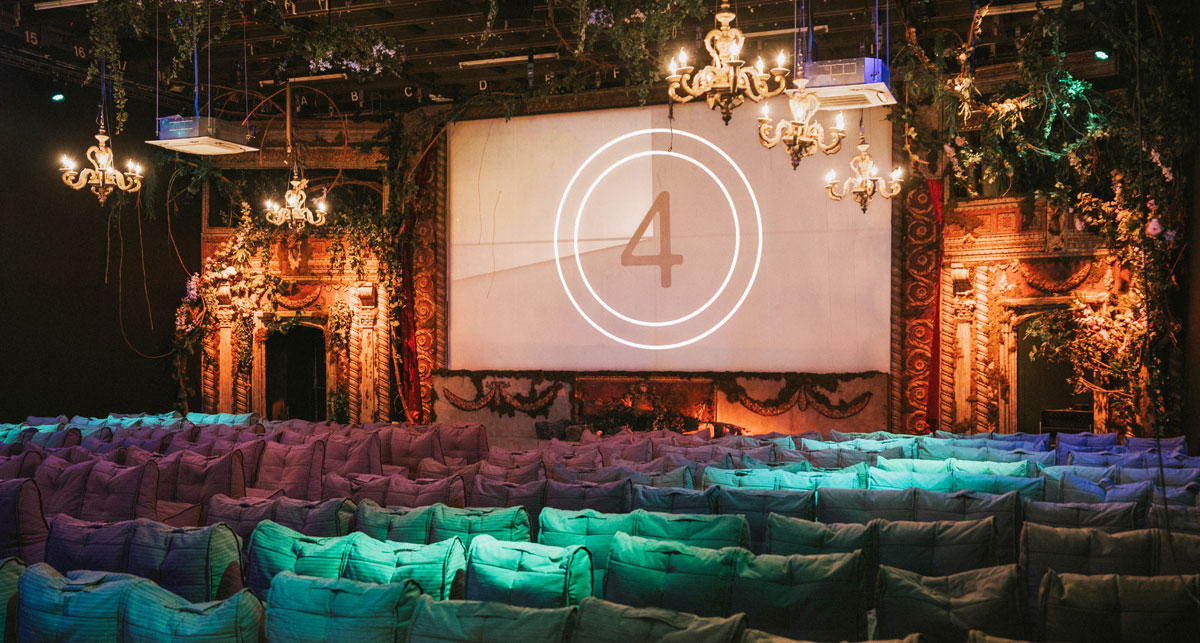 A night at the flicks is always a winner, but when you make it a trip to a luxury cinema, you’ll make it a truly memorable and enjoyable night out. From top-of-the-moment blockbusters through to age-old classics, luxury cinemas tend to show them all and the onus is on the entire experience, not just the film itself. And London is home to some of the very best cinemas in the UK.

Here I’ve put together a detailed list of the best luxury cinemas in London. There is no single winner as far as I can tell – you can have a fabulous and unique evening at each. But take a look and find the perfect luxury cinema in London according to what you’re looking for.

Coming in with a slight cheat to start with as this isn’t just one cinema. Here is a shout out to the 14 Everyman cinemas across the capital. The Everyman cinemas are always in interesting and varied buildings with original features. It’s definitely about luxury and comfort here. The sofas are fabulous (or arm chairs if you don’t fancy sharing) and you have your own table area where the waiting staff can bring you anything from a glass of wine to a pot of tea. Don’t stop there though. Their burgers are incredible and the kids will love you forever for the jars of choose-your-own ice cream sundaes.

Not sure which one to try? The Screen on the Green in Islington is a much-loved favourite.

Found in Portobello Road and one of London’s oldest cinemas. With a similar feel and vibe to Everyman, the Electric Cinema manages to go even further. Along with the glorious leather armchairs, there are also six double beds!

A trip to the movies needs to start with ordering whatever you fancy from the bar, but of course the extravagance extends to ordering dinner to enjoy with the show too.

Just a film? Think about the whole luxury cinema experience when you book to watch a film at the Backyard Cinema in Wandsworth, London. This is a totally different kind of movie watching event. Firstly, the film you choose is one thing, but expect to be transported with fabulous theming. Getting to your seat at Christmas time by navigating your way through an old curiosity shop and a ball pit river is obviously a talking point! Next, you get cosy on the bean bag seats. These may even be ‘on the beach’, if you’re there in summer.

Make time afterwards to hang out and enjoy the bars and street food in the courtyard. You simply must try the rosemary chips here!

Genesis Cinema in Whitechapel is quaint and cosy, and the screen will feel intimate and unique. You can snuggle up on a sofa, grabbing a blanket for extra snug factor. There are bars within the screen area so you can nip back to get a top up, and this is also a luxury cinema which won’t break the bank.

5. The Cinema at Selfridges

Roll together an indulgent shopping trip and a classic cinema trip at Selfridges in Mayfair. Only opened in 2019, and of course closed for much of its life thanks to Covid, it still feels completely new.

The Cinema at Selfridges has three different screens, none of which are huge (largest is just 80 seats). You can see new releases and independent films, all to be enjoyed from plush seats which recline.

Order your food and drinks before you head in. Top tip: you can even order afternoon tea!

Often listed as the most luxurious cinema in London, Curzon in Mayfair is eclectically different. Expect a swanky modern-feel cinema within a grade II listed auditorium. If you really want to push the boat out you can even choose a royal box, and yes, you can have Champagne there too! Expect sophisticated snacks and a touch of being made to feel like the stars of the show.

Undoubtedly still one of the contenders for best cinema in London where luxury is concerned is Picturehouse Central in Piccadilly, on the corner of Shaftesbury Avenue and Great Windmill Street.

Head through the doors into a spectacular lobby with a distinctive artsy vibe where everything is thought through from striking lighting to a bold members-only bar. This is the place to watch indie films and even see live theatre screenings.

Pretty new on the luxury cinema scene is Archlight Cinema in the regenerated Battersea Power Station district. This is a cinema that film buffs will particularly love because the tech is completely state-of-the-art and the sound is phenomenal.

There’s a huge choice when it comes to food and drink, which you can enjoy during your film. Make sure you also leave time for hanging out in this brilliant up and coming area.

Who doesn’t want to go to the cinema on Regent Street?! This is apparently London’s first ever independent cinema, and it’s definitely a case of watching a film with complete decadence. It actually started off life as a lecture theatre – but think fancy, not run-down student style.

You can watch all types of films at Regent Street Cinema, from the latest releases to indie flicks.

I do love an independent business, and the Castle Cinema in Hackney is just that. Indeed, it now bills itself as a community crowd-funded cinema. How cool is that?!  It was actually first opened way-back-when in 1913 and, frankly, you get the same atmosphere when you go there today. That nostalgia when heading to the big screen is just wonderful. The armchairs here are super comfy and I love that you can order yourself a craft beer to enjoy alongside the film.

Any discussion of cinemas in London would be incomplete without paying attention to the BFI on the Southbank. The flagship of the British Film Institute, here it is all about fantastic films showcased beautifully. You’ll find jam-packed listings, including festivals, and see cult classics sitting easily alongside quirky and surprising indie offerings. The restaurant and bar are a great place to spend some time too.

12. The Fellowship and Star

It doesn’t always make it onto luxury cinema lists because you won’t find armchairs or the out-there luxury touches of some of the other cinemas listed so far. However, it makes its way onto my list because it has something completely unique. Is it a pub? Is it a cinema? A music venue? Well, it is all three and does this fabulously.

If you’re fed up of a movie night being bound by the film times then The Fellowship and Star is for you. Enjoy the pub before and after. It’s a low cost option too.

One Aldwych is pretty hot on offering a first class service and that extends to how they offer film nights in their tiny 30-seater cinema. Watching a film here is all about doing it in style. Indeed, your ticket actually includes both an indulgent glass of Lallier Champagne and dinner over three courses in the hotel’s restaurant. Check out the listings carefully before you book because it’s not open every night, so to see what you want, you’ll need to be savvy. That said, perhaps it doesn’t matter what film you watch here?!

Found in West London, the Olympic Cinema (housed in the legendary Olympic Recording Studios) has really worked hard at creating a fantastic film-viewing space. There’s even a Members’ Screening Room here, but even the regular punters get spoilt with reclining seats and personal tables. Order a bottle of wine and sip your way through whatever takes your fancy to watch. Check out the love seats for a romantic date night.

Ok, so you’re going to have to wait for an invitation, or organise an event yourself. But if you get a chance to enjoy a film at the Bulgari Private Cinema then you should. The cinema is dedicated to Sir Richard Attenborough which gives it a wonderful aura of something special. Here it’s not just about state-of-the-art sound and visuals, but there are also electronic voting capabilities! Those hiring the cinema can choose new releases or delve into the curated library of 300 titles covering old and new. It’s sometimes used for premiers too.

Odeon Luxe cinemas can be found across the capital and offer a cut above the standard Odeon offering. I like the Odeon Luxe in Swiss Cottage where you can enjoy the luxurious reclining leather seats (with bags of leg room!) and staff who make you feel at home. There’s something really special about being able to enjoy a glass of fizz alongside a slice of homemade cake as you watch a film.

When you next want a movie night in London, think luxury! Choose somewhere that doesn’t merely show you the film, but gives you an experience that elevates your night.