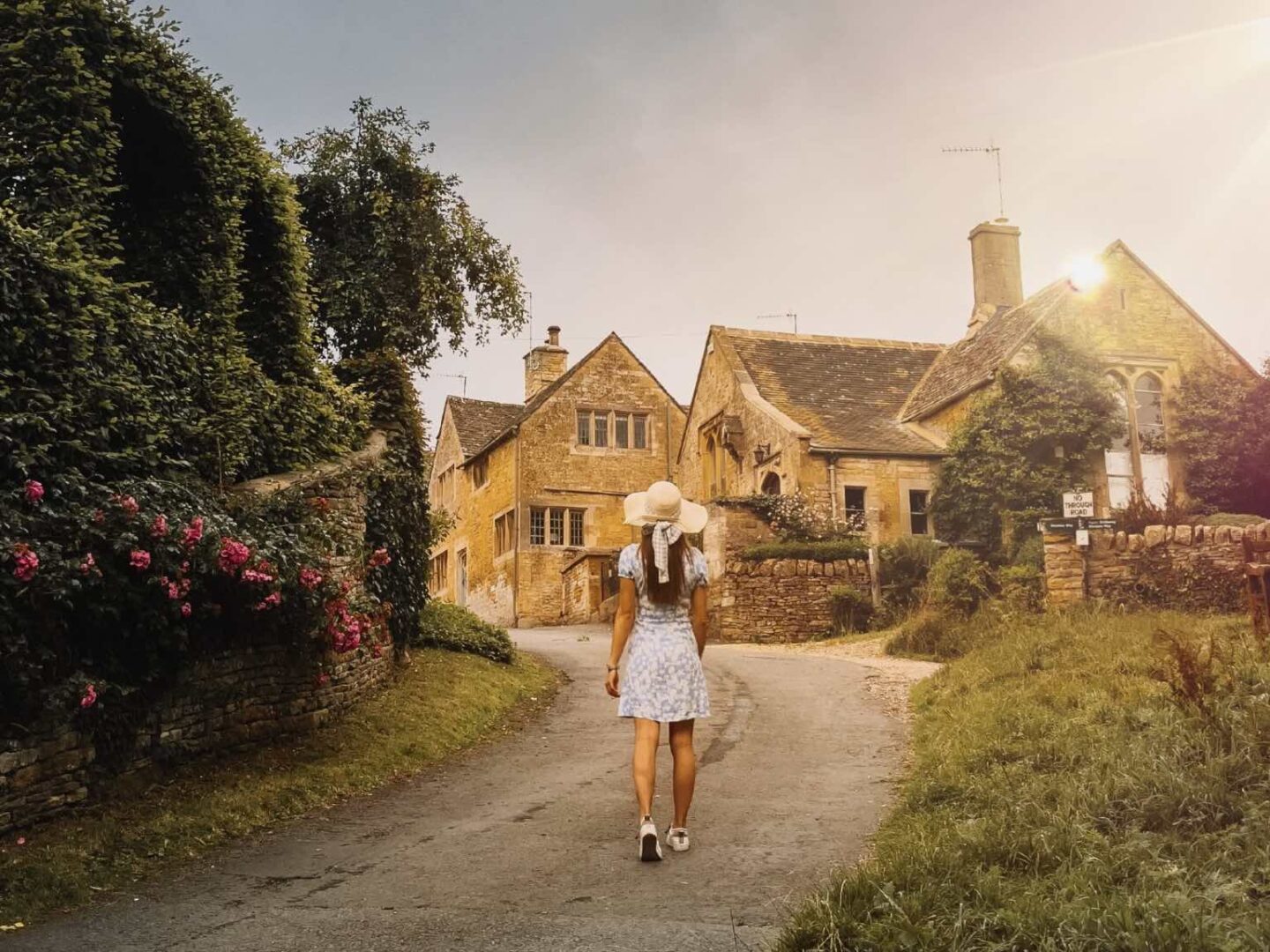 Upper Slaughter is a tiny Cotswolds village that brings heaps of cottage core charm. Despite being one of the prettiest villages in the Cotswolds, it is often overlooked in favour of its more popular neighbour, Bourton-on-the-Water. Even its twin village of Lower Slaughter is more well-known

Don’t let this stop you from visiting Upper Slaughter. It’s such a typical Cotswold village, oozing quintessential charm and appeal. Upper Slaughter is as picturesque as any Cotswolds gem, sitting unassumingly on the River Eye which trickles through its centre.

Upper Slaughter is actually listed in the Domesday Book of 1086, but its name doesn’t lend itself to a macabre history. Its name actually comes from the Old English ‘slothre’ which simply meant muddy place. It’s not muddy now that the village exists, unless of course you visit in winter and enjoy an Upper Slaughter walk, when mud is definitely to be expected!

Indeed, Upper Slaughter is a ‘doubly thankful’ village, having not lost any residents in either of the World Wars, even when it was bombed quite heavily in February 1944.

Even if you’re only passing through, Upper Slaughter will leave its mark on your heart. Discover all about the pretty Cotswolds village in this guide to visiting Upper Slaughter. From restaurants and hotels through to the best things to do, here’s everything you need to know.

Upper Slaughter – what you need to know

Where is Upper Slaughter?

Upper Slaughter is nestled in the North East corner of the Cotswolds in Gloucestershire. It sits on the bubbling River Eye that connects it to Lower Slaughter just one mile away.

Upper Slaughter is about 3/3.5 miles from the more well-known villages of Bourton-on-the-Water and Stow-on-the-Wold. Even if you choose to stay in one of these larger villages, don’t miss out on visiting this adorable village too.


How to get to Upper Slaughter

Upper Slaughter is very close to the A429, linking it easily to London about two hours by car. However, while it is one of the easier Cotswolds villages to reach from London, no matter how you come into Upper Slaughter, the local lanes around are generally tiny.

If you arrive from the north, you’ll need to dip your car’s tyres in the ford (river crossing), making it all the more charming.

Upper Slaughter is particularly tricky to reach by public transport. It is possible to get buses from Cheltenham, Kingham and Moreton-in-Marsh (where there are railway stations) to Bourton-on-the-Water, but you’ll still have about three miles to go!

With some planning you can arrange a taxi, or it takes about 45 minutes to walk.

There is some street parking in the village square, but realistically it fills up quickly, particularly in summer. If you’re planning to park here then arrive early. A popular option is to park in Lower Slaughter and walk 20 minutes to Upper Slaughter, which is a picturesque way of visiting both villages.

When it comes to Upper Slaughter accommodation, you’re really only talking about one place: The Lords of the Manor. This iconic 17th-century Cotswold stone building really lives up to its manor name. It has been one of the most appealing Cotswolds hotels since it became a hotel in the 1960s.

A stay at the Lords of the Manor will leave you feeling very much like you are a Lord or Lady. Furnished with antique items and artworks, in a peaceful spot surrounded by eight acres of beautifully manicured lawn gardens, you’ll find it hard to leave.

The Lords of the Manor in Upper Slaughter boasts 26 bedrooms, each of which is unique. Every bedroom offers period charm balanced with modern comfort.

For the highest level of comfort and luxury, choose one of the Lords Rooms with their clawfoot baths. Perfect for a decadent soak after an Upper Slaughter walk – as is their lounge area where you can unwind with a good book.

This is a peaceful and luxurious Cotswolds hotel rich in character and matched with exemplary service. The restaurant often tops the listings, and is well worth dining in.

For dog lovers, you can bring your furry friend along too.

There are no other hotels within Upper Slaughter itself. However, there are two nearby hotels in Lower Slaughter worth considering:

This contemporary stately country house is a picturesque and welcoming boutique hotel. The Slaughters Manor House offers 19 splendidly decorated rooms between the coach house and main house. There are many luxurious touches, combined with a wonderful restaurant.

Another option is the old world styled Slaughters Country Inn. Enjoy snuggling up with a book and a mulled wine in front of a roaring log fire, or decadently sipping some fizz from your roll top bath.

There’s a picturesque terrace perfect for enjoying a cup of coffee before heading out to explore the local area. The Slaughters Country Inn also offers self-catering cottages.


Where to eat in Upper Slaughter

There isn’t actually a pub in the village, and Upper Slaughter restaurants are thin on the ground! It’s a tiny village and this is part of the allure. However, Upper Slaughter has a real foodie culture, thanks to The Lords of the Manor.

The Lords of the Manor

There are two options for eating within the fantastically luxurious Lords of the Manor.

Atrium is the name of the hotel’s restaurant, which is a Michelin-starred fine dining restaurant serving exquisite food. Expect gloriously beautiful dishes that taste amazing. Bear in mind that, like the village, the Atrium is small with just 14 covers, so you’ll need to make a reservation well in advance.

Alternatively, the Dining Room at the Lords of the Manor is the other of the Upper Slaughter restaurants. While less formal, you can still expect exceptional food with scrumptious offerings.

It’s a great spot for a Sunday roast or an afternoon tea. Alternatively, join with your travel companions and enjoy a sharing platter on the terrace.

The list of places may be short, but it’s high quality! For more choice, head to nearby Bourton-on-the-Water where there is a greater choice of pubs and restaurants.

5 best things to do in Upper Slaughter

Upper Slaughter is like stepping back in time, and with this you should slow down and simply enjoy the beautiful village.

Indeed, since the golden Cotswold almshouses of the village were reconstructed in 1906, there has been no new building work in the village. It therefore retains its quaint back-in-time feel. Take a seat in The Square and simply watch the world go by.

Amble through the tranquil and picturesque streets and see what little details you can spot. There’s a Grade II listed Old School House by the church worth noticing. An often missed spot, and perfect for a photo, is the smaller footbridge to the left of the main footbridge. It’s a great place to photograph the classic cottages on the other bank.

Upper Slaughter has also been a film set for a few films, so film buffs get spotting! Given that it has remained largely unchanged for over a century, it’s no surprise that it’s considered an ideal spot for filming. Father Brown (2013), Our Mutual Friend (1988) and The Sailor’s Return (1978) have all been filmed here.

If it’s a warm day then an idyllic thing to do is remove your shoes and go for a paddle in the stream and around the village’s ford. Local children and their families enjoy this spot in summer and it’s a blissful place to unwind.

This Anglican church dates back to the 12th century and inside you’ll be amazed by the interior. Take care not to miss the highly-detailed stained glass window, which is towards the back of the church.

If you’ve spotted this older stained glass then you certainly won’t miss the Thomas Denny stained glass piece (who also has work in Gloucester Cathedral). His work is striking and unusual but well worth taking the time to view.

The church also plays host to a book sale, so pop in here to buy a book to enjoy down by the river.

3. Enjoy dining or having afternoon tea at The Lords of the Manor

Much of Upper Slaughter’s appeal centres on the only hotel, The Lords of the Manor. Book in for a Michelin-starred fine dining experience at the Atrium.

Alternatively, enjoy excellent food in The Dining Room where locally sourced ingredients are the star of the show. Or if you’re looking for a quintessential afternoon tea in the Cotswolds then you can find it here. When the weather is good, enjoy it on the terrace or in the gardens.

The sharing platters and small plates are also wonderful for enjoying outdoors, making the most of the beautiful setting.

Head to the Castle Mound to the north of the village and you should be able to explore the ruins of the Norman motte and bailey. This is also a fantastic place to bring a picnic on a summer’s day.

It’s thought that the hill was used for defence during the civil war of 1139 until 1153. Although archaeological finds put it more likely to have actually been inhabited from the 12th and 13th centuries.

If you’ve come to Upper Slaughter then you should definitely enjoy a walk to make the most of the village and its surrounding countryside.

Alternatively, go right across the meadow and you can enjoy a walk along the banks of the River Eye.

The meadow can get pretty muddy if it has rained and in the winter, but don’t let that stop you walking to Lower Slaughter. Instead, walk up the quiet road.

If you’d like a slightly longer walk, then you can walk from Upper Slaughter to Stow-on-the-Wold. This is a four mile walk and should be rewarded with a drink in a pub or a meal!

Upper Slaughter may be small but don’t miss it off your Cotswolds itinerary. You’ll only need a couple of hours to explore, unless you want to stop by for lunch or tea.