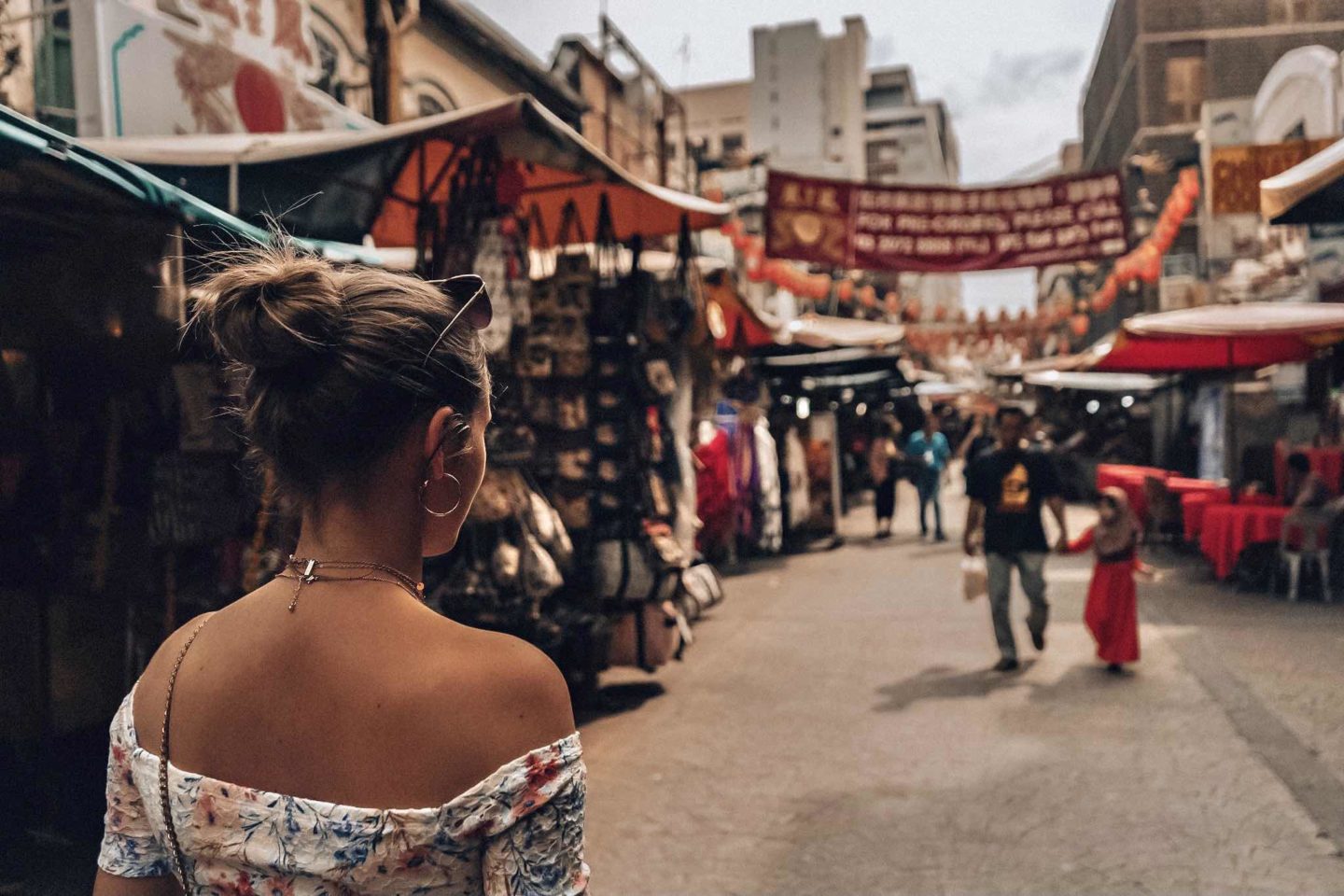 If you want to find things to do in Georgetown, stay right here to find out all you need to know. Highlights of any visit to Penang include sampling street food from various cuisines, exploring colonial and vibrantly decorated buildings, and discovering the local street art scene as well as the waterfront.

The centre of the city is a listed UNESCO World Heritage Site. It’s home to populations of immigrants from India and China as well as other parts of Malaysia. This is reflected in the local fusion cuisine, and the fact that all cultures rub along most harmoniously is something for Penang to be immensely proud of. It’s undoubtedly one of the best places to visit in Asia.

In this guide, I cover every major tourist attraction in Penang’s Georgetown. Plus, you’ll find recommendations of where to eat, what to see and do, and the best places to stay.

10 best things to do in Georgetown, Penang

If you’re wondering what to do in Malaysia’s Georgetown, here are my top 10 recommendations. From street art and street food to amazing colonial and Chinese architecture, there’s something here for all types of traveller.

One of the most interesting facts about the Georgetown street art scene is the fact that it was largely planned by the local council. They hired a London art school graduate in 2012, with the intention of revitalising the original Chinese shophouses dotted around town.

The Little Girl In Blue is Ernest Zacharevic’s best-known piece. This appealing 20 foot figure in aqua blue pyjamas can be found on Muntri Street. There are plenty of smaller displays to admire too.

Other areas to explore include Weld Quay, Jalan Penang, Leith Street, Ah Quee Street and Armenian Street. All of which have some intriguing and interesting examples of the street art genre.

Sampling locally produced street food can mean trying some of the best food in Georgetown. Penang Road Market is one of the most popular locations. While for many, the best street food available in Georgetown comes from the various hawker centres. This includes Chulia Street’s night time selection of stalls and various food courts dotted around town.

As well as the street food, Penang is home to some outstanding Indian, Chinese, Malaysian and fine dining restaurants. Some of these can be found at the hotels recommended later on in this guide.

Officially known as Cheong Fatt Tze Mansion, this striking blue building is a must-see for many visitors. Due to its location on Leith Street, it can also be seen while exploring the Georgetown Malaysia street art scene around the area.

This restored heritage property featured in the 2009 movie The Blue Mansion as well as other productions. Visitors who tour the structure can see seven staircases and 38 rooms, plus highlights such as art nouveau style stained glass windows, courtyards paved with granite and Chinese floor tiling.

The mansion also operates as a boutique hotel, so visitors can even book a stay at this charming, historic property if they wish.

Kek Lok Si is the biggest Buddhist temple to be found anywhere in Malaysia. It occupies a dramatic location atop Air Itam hill, and has dominated the landscape here since the late 19th century.

The vast site is divided into lower, middle and hilltop sections, culminating with a huge Goddess of Mercy statue set among temple buildings and gardens. At the middle section there is a pagoda and the pavilion of the Four Heavenly Kings, as well as gardens and other structures. The bottom level is home to the turtle liberation pond and a variety of refreshments and gift stalls.

Climbing all the staircases to the top requires some effort. But for those who are able, it’s well worth the ascent.

Kota Cornwallis is a star-shaped fort originally constructed in the late 18th century. Its intended function was to defend Penang against hostile Kedah forces, pirates and even – at the time of the Napoleonic Wars – French invasion. The star shape was intended to allow for all-round defence.

Malaysia’s largest surviving fort was named after a British Army general who was known for a time as Earl Cornwallis. In reality, the bastion was used more as an administration centre than anything else. Today, the 10 foot high walls encircle the gardens, which contain a statue of British explorer Captain Francis Light, the man credited with the founding of Penang.

At the very end of Chulia Street you can find a portion of the Penang Heritage Trail known as the Clan Jetties, dating from the late 19th century. Each of these landing stages was populated and controlled by a particular Chinese clan – hence the name.

These old landing stages are still home to a number of clans, including the Chew, Lim, Tan, Yeoh, Lee and Koay groups. The Chew Jetty is the most popular among tourists. Here you can see – and capture on camera – a lengthy walkway, stilt houses, and even a Chinese temple.

Though its name may suggest a public transport hub, Georgetown’s Hin Bus Depot is actually a thriving centre for creativity in Penang. The depot houses exhibition and events spaces, as well as a gallery.

The founding of Hin Bus Depot as an arty hub is down to none other than Ernest Zacharevic. He was the Lithuanian artist brought in to establish Georgetown’s street art scene. A group of artists breathed new life into the neglected structure, which first welcomed members of the public in early 2014.

First constructed over six centuries ago, Khoo Kongsi is arguably the finest example of a clan house in south east Asia. As Penang’s most famous kongsi, also referred to as Dragon Mountain Hall, it was formerly where members of Chinese clans came together to pay homage to their ancestral line.

Khoo Kongsi is ornate in decoration. Its most impressive features include the entrance hall’s stone carvings, elaborate murals, ceramic sculptures and over 35 guardian statues. The structure is set on a square of granite and is lit within by glowing orange paper lanterns.

China House comprises three original buildings linked by one outdoor courtyard. Today, China House is one of the key Georgetown attractions for numerous visitors. It is home to an eclectic mix of outlets including a bakery, cafes, restaurants, shops and galleries. Live music is often played here too, and there are also reading and kids’ zones.

With over 30 cakes available daily, numerous Insta-worthy locations and restaurant menus for all budgets, China House is a vibrant and interesting place to visit. Visitors can also look out for a tiny singing cat sculpture and an ultra tall mirror.

The history of Georgetown in Penang is fascinating and in part down to the failure of the Portuguese who attempted to colonise it before the British arrived. When first founded, it was known as Prince of Wales Island, although the capital was known as Georgetown from the start.

Due to its rich and varied history, Penang boasts a number of colonial style buildings. The best examples include the Queen Victoria Memorial Clock Tower, the High Court, the Wisma Building, the Penang State Museum, the City Hall, the Georgetown Dispensary, Suffolk House, Anglican St George’s Church and the Eastern and Oriental Hotel.

There are plenty of things to do in Georgetown, Penang at any time of year. From November to January the climatic conditions are dry, while February, March and April tend to be quieter once the New Year festivities have passed. It’s warmer and more humid between May and October, but there is lots to do whatever the weather.

How to get to Penang

Most visitors will travel via Kuala Lumpur to Georgetown, Penang, and the national carrier alone operates over 20 daily flights between the Malaysian capital and the island. It’s also possible to drive from many destinations via the North-South Highway, or to take a six-hour train trip from KL.

Georgetown Penang weather is coolest and driest during November, December and January. From August to October in particular you can expect more tropical weather, with high humidity and more rainfall. The period between February and July lies somewhere between the two extremes.

Where to stay in Penang

There is a wide range of accommodation in Georgetown and Penang to suit all budgets and requirements. Here are my top recommendations.

It’s worth booking a stay at the Eastern and Oriental Hotel just to see the stunning colonial facades it boasts – one facing Georgetown and the other overlooking the sea. This all-suite hotel was built by the Sarkies brothers who founded Singapore’s famous Raffles Hotel, and it shows.

Known simply as the E&O to most, it has a series of elegant eateries and bars, where you can sample both a Singapore Sling and an E&O Sling. If you want a 5 star hotel in Georgetown Penang with an illustrious history, this is without doubt the place to book.

Sample the Blue Mansion from an entirely different perspective by booking a stay at the boutique hotel it houses. From decorative arched windows and original wooden floors to simple clean linens and ornate rugs, the place is packed with character. It’s also very centrally located.

Tucked away on Stewart Lane in central Georgetown, Seven Terraces offers a range of accommodation in suites and apartments. All of Penang’s star attractions can easily be reached on foot from here, and the on-site restaurant is highly recommended by past guests in particular.

Offering panoramic views over the water from floor-to-ceiling windows, the SUNRISE Gurney Seaview Luxury Duplex offers a friendly welcome, private parking and lots of well-equipped, light-filled space. With two bedrooms and two bathrooms, up to six guests can be accommodated in style.

Belonging to the upmarket Shangri-La group, Hotel Jen offers a range of double, twin and family rooms. This contemporary hotel is centrally located and offers modern amenities like a 24-hour gym and complimentary beach shuttle service. Guests staying here are also welcome to use the pool at Shangri-La’s Golden Sands resort in Batu Ferringhi.

How long to spend in Georgetown

How long you stay in Penang’s Georgetown really depends on what you want to do while you’re there. There are various Georgetown highlights that will appeal to the interests of different people.

Architecture buffs, for example, may easily spend a week wandering around the city, admiring the many fine examples of Chinese and colonial structures. Arty types may wish to spend a while seeking out the street art, as well as at China House and the Hin Bus Depot.

From the night market in Georgetown to the fine dining restaurants found at luxury hotels, there is also a thriving food scene to sample during your stay.

Around three nights, or a long weekend, is plenty for many visitors. Some will combine a spell in Georgetown with a beach break in or close to Batu Ferringhi and Tanjung Bungah, on the island’s northern coast.

Some visitors ask whether Georgetown is a safe place to explore and stay. The answer is yes, as rates of violent crime are very low. As with many tourist haunts, the main issues tend to be petty thefts like pickpocketing and snatching, so do always keep your valuables close to you and out of sight.

With extremely helpful and friendly locals, Georgetown is perfectly suited to solo travellers. Just be sure to follow the usual solo travel advice and you’ll be just fine.

Have you been to Georgetown or have any recommendations? Let me know in the comments or get in touch on social media!

Best places to visit in Asia

21 best things to do in Singapore