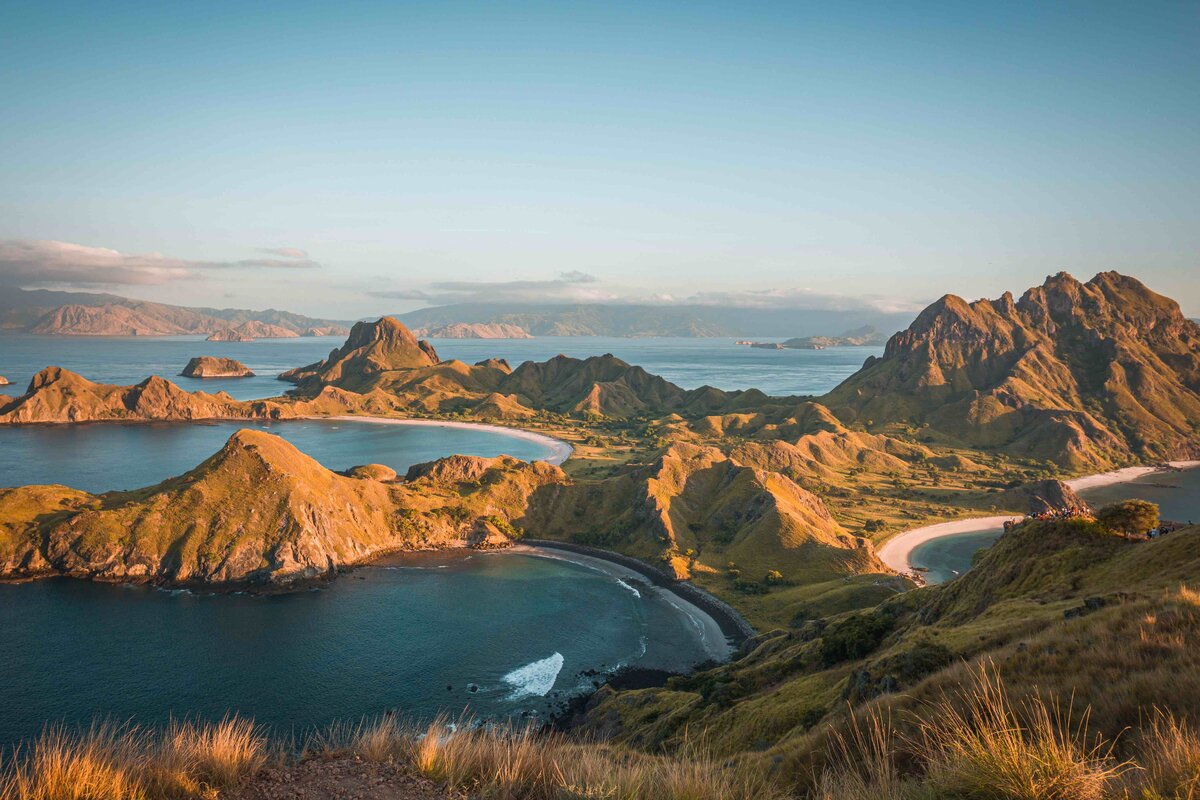 Arguably one of the most popular holiday destinations in the past couple of years, Indonesia has a lot to offer travellers, explorers, and adventurers. But despite most tourists choosing to head to islands like Bali, which are undoubtedly beautiful but also incredibly crowded, I’ve got a bit of a different suggestion for you – Komodo National Park!

The park is located within the Lesser Sunda Islands and includes the islands of Padar, Rinca, and Komodo, as well as about 26 smaller ones. It was founded in 1980 in order to protect the Komodo dragon, which is the world’s largest lizard. 11 years later, it was declared a UNESCO World Heritage Site. And it’s a destination you must visit. Here’s my travel guide to visiting Komodo National Park.

A bit of geography

The national park comprises a few islands. Most notably, you have Komodo Island, Padar Island, and Rinca Island. These, and the surrounding islands, cover a total area of 1,733 square kilometres, out of which 603 square kilometres are land.

The terrain is mostly rugged, with rounded hills which reach altitudes of up to 735 metres. The climate is oftentimes considered to be among the driest climates in Indonesia. Visiting the park between May and October, during the dry season, might have you dealing with temperatures of up to 40 degrees Celsius.

When to visit Komodo National Park

Komodo National Park is actually a great year-round destination, which means that if you’re willing to adjust to the weather and crowds, you can go whenever you’d like. However, there are still objectively better and worse times to visit.

The ideal time to visit, according to many, is April to November. Generally, this is during the dry season, but it’s still true that there are a lot of changes in that period. April through June, specifically, is where you’ve got the best chance of enjoying a calm sea and beautiful green landscapes. This is also a time period when you don’t have a lot of tourists, and the islands are all perfect for exploration. As a bonus, you might get to see (and even dive with) manta rays.

July and August are the most popular months for tourists, and for that reason, you’ll notice prices starting to soar and incredible crowds scattered throughout the islands. True, you’ll find milder temperatures, but you’ll also find a lot of winds and waves. To add to this, it’s mating season for the Komodo dragons, so spotting them will be difficult.

Things to do in Komodo National Park

There are plenty of things to do in Komodo National Park, and most of them are possible even if you’re on a cruise and are somewhat limited in terms of time.

As you’ve probably guessed, one of the main things to do is head to Komodo Island or Rinca Island to visit the Komodo dragons. They’re the world’s largest species of lizards, which grow up to 3 metres in size, and are known as the dominating predators on the islands. There is a lot to learn about the Komodo dragons, and you simply cannot head out to the national park without checking them out.

If you’re on Padar Island, you should definitely make time for a hike, as there are some truly spectacular landscapes to enjoy. You don’t need to spend hours hiking to find the best views. In fact, it only takes some 20 to 30 minutes to reach the upper viewpoint. To really make the most of it, try to head out there during sunset or sunrise. It’s a phenomenal view, and one you’ll remember for a long time to come.

Last but not least, Komodo National Park has some of the most pristine coral life you’ll ever come across. From the reefs to the fish life, it’s an absolute paradise for fans of diving and snorkeling, and you’ll have an immense amount of fun if you decide to go for it. The underwater world is just brilliant, and one of the prime destinations to visit is Pink Beach. Not only is it perfect for exploring coral life, but it’s also excellent for sunbathing and relaxing once you’re done.


Komodo National Park is a fantastic destination for everyone. There’s something to do at any moment in time, from diving and snorkeling to hiking and sightseeing, as well as seeing the iconic Komodo dragons the national park was named after. If you’re keen on trying something new rather than heading out on a typical holiday in Asia, it’s the perfect destination.