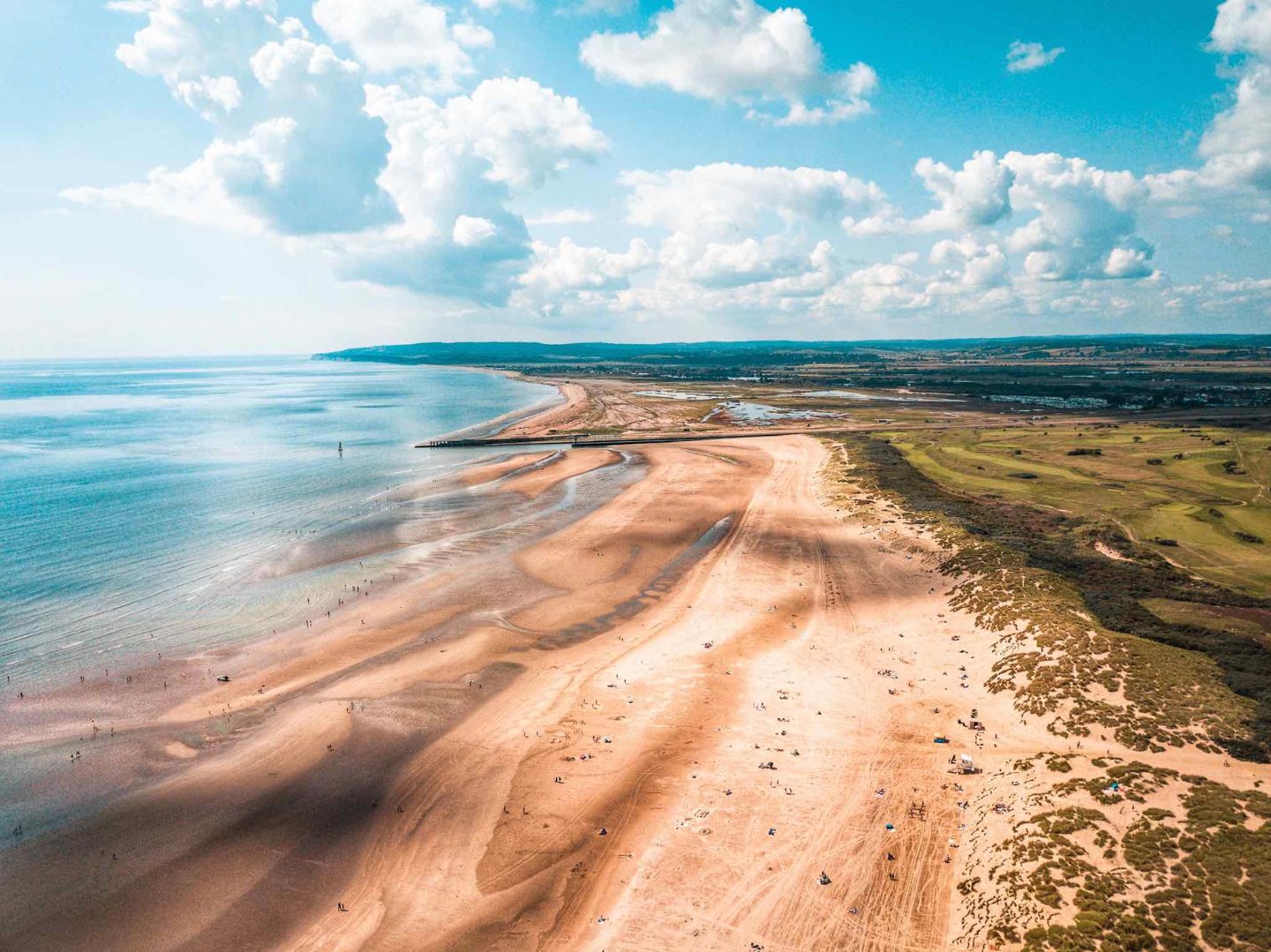 Camber Sands is a beautiful beach in East Sussex, famed for its soft golden sand that stretches for mile after mile. Most beaches along this section of the South Coast of England have pebbles or shingles, while Camber Sands is home to the only sand dune system in East Sussex. It is a natural habitat for various wildlife and plants, remaining wonderfully unspoilt.

When the tide is low, there are remarkably wide open stretches of sandy beach, as far as the eye can see. Due to the size of the beach (sprawling for 7 miles in total!), you can still find a relatively quiet spot even on the busiest summer days.

The most popular section of the beach is the western end, located at the mouth of the River Rother. Sand starts to transition into shingle further along towards the east.

Due to its size and natural beauty, Camber Sands has been a filming location for numerous films and TV programmes. These include Dunkirk, The Longest Day, The Monuments Men, The Invisible Woman, The Inbetweeners, and Doctor Who.

In this guide to visiting Camber Sands, you’ll find everything you need to know about this beautiful area of the UK. From how to get there and where to park, to things to do and places to stay.

Where is Camber Sands?

Camber Sands is located in East Sussex on the South Coast of England. It is close to the border with Kent and the neighbouring village of Camber. The closest town is the pretty and popular Rye.

How to get to Camber Sands

Camber Sands is easily accessible from anywhere in the South East of England. It is located under two hours from London, making it a great day trip for anyone looking to escape the Big Smoke.

The beach is reached via Camber Road, which can be accessed via the A259 near Rye. If you’re travelling from the north or the east, the M20 is the best route. From the west, it’s the A27.

The closest train station to Camber Sands is in Rye. Trains to Rye travel from Ashford International or Hastings. If travelling from London, take a train from London St Pancras and change at Ashford.

Once in Rye, there are regular buses which run between Rye train station and Camber Sands. They take around 10-20 minutes depending on traffic. Or, if you have the time and appropriate footwear then it’s a three mile walk and should take around an hour.

Facilities and other information

There are three paid car parks in Camber, all pay and display. They include Camber Central, Old Lydd Road, and Western Car Park. RingGo is available in all car parks if you don’t have cash.

Yes, there are toilets in the main car park closest to the beach. There are a good number of cubicles, as well as an accessible toilet. They are regularly cleaned, but bear in mind that they are public toilets on a beach, so they can get a little messy.

During the winter months, dogs are allowed to roam free along the entire stretch of the beach. Between May and September, there are some restrictions in place. Dogs must be kept on a lead and within restricted areas. Watch out for the signs indicating where your furry friends are allowed.

There have previously been lifeguards in temporary operation at Camber Sands, but they are not fixed. So extra care is needed. There is a beach patrol but this is not the same as having a lifeguard.

There are a couple of safety precautions to be aware of. Firstly, be careful of sandbanks under the water, as these can result in sudden increases in water depth. Also be wary of riptides.

Are barbecues allowed on the beach?

Disposable barbecues are not permitted at Camber Sands. Gas-powered barbecues which are raised off the sand are allowed, but only on the Western side of the beach.

If there are over 10 people in the group, then permission is required from Rother District Council at least four weeks in advance. It is illegal to barbecue in the sand dunes, as it poses a serious safety risk.

Things to do in Camber Sands

Camber Sands is a great place to enjoy some thrilling water sports. Check tide times before visiting so you can get the best use of the beach on your trip. A useful website for this is Magic Seaweed.

Camber Sands is very windy, making it perfect for adrenaline-pumping kitesurfing. It is generally considered to be one of the best places to go kitesurfing in the South of England.

Top tip: wear wraparound sunglasses to protect your eyes from the sandy wind.

Camber Sands is a good spot for a paddle or a swim in the sea. If the wind isn’t too strong, take an inflatable with you and relax on the rolling waves.

It is generally safe to swim at Camber Sands, but be wary of fast-rising tides at the beach. Also be careful of the sandbanks which can take the water from waist-deep to shoulder-deep within one step.

Familiarise yourself with the flag system, so you know when and where it is safe to swim.

Get the wind in your hair with a RIB tour of the area. A RIB (Rigid Inflatable Boat) is a powerful inflatable boat, which is lightweight, durable, and fast.

Bounce along the water at high speed while taking in the sights of Camber and its surrounding area.

Camber Sands is one of the best places for beachcombing in the UK. It is a popular activity with kids, as they can enjoy the challenge of uncovering hidden gems beneath the sand.

Whether it’s collecting shells, or even discovering a hidden message in a bottle!

5. Picnic on the beach

What better way to relax on a hot summer’s day in England than with a beach picnic. Although windy, it’s possible to find a more sheltered spot among the grassy sand dunes.

Bring your own hamper of snacks or indulge in some fish and chips from the beach cafe. A chilled bottle of wine is optional but highly recommended!

For something a little more active, explore the roads surrounding Romney Marsh by bike. The Sustrans Coastal Cycle Path is a good route for family bike rides.

You can also hire electric Fat Bikes from Ebike Hire for something a little more fun. Fat bikes will allow you to explore the coast and nature reserve by two wheels.

With its soft sand and rolling waves, simply taking a stroll along the beach at Camber Sands is immensely invigorating. It’s especially special at sunset, when the golden light reflects off the water and creates a magical orange hue all around.

There are also a number of marked coastal and country walks around the area.

Camber Castle is located between Rye and Winchelsea. It is a historic castle that was built by Henry VIII to defend the port of Rye, and is now managed by English Heritage.

Only ruins of the castle remain, but you can still take a guided tour of the interior during summer months. The castle is only accessible on foot, situated a one-mile walk from Rye.

Take some time to meander around the beautiful Rye Harbour Nature Reserve, a Site of Special Scientific Interest. Its varied landscapes include woodlands, salt marshes, meadows, lagoons, sands, and wetlands.

The reserve is also home to an abundance of wildlife and is a Special Protection Area for birds. It is therefore particularly popular with birdwatchers and keen photographers.

There are also some unique military fortifications in the area, adding another dimension of interest. The Rye Harbour Nature Reserve is a great place to go walking, with a number of trails to explore. Plus, it’s dog-friendly so you can bring your four-legged friend along with you.

You cannot visit Camber Sands without taking some time to explore the beautiful town of Rye. Wander the pretty sloping cobbled streets, including the highly Instagrammable Mermaid Street.

Explore the many independent shops and boutiques, then stop for a break in one of the quaint tea shops.

Restaurants and pubs in Camber Sands

There are plenty of fantastic restaurants and pubs to try within the area. Here are the best places to eat in and around Camber Sands:

Places to stay in Camber Sands

If a day trip isn’t quite enough to explore this beautiful area, then why not stay for a night or two. Nearby towns include Rye, Hastings, Winchelsea, Dungeness, and Pett. Here are the best places to stay in and around Camber Sands:


Camber Sands is a truly unique part of England that feels like a slice of the Caribbean – albeit not quite as warm! It’s a must for your UK bucket list and definitely one for the warmer summer months.

Have you visited Camber Sands? Let me know in the comments, or get in touch on social media! Wanting to explore more of the UK? Have a read of my UK travel guide. 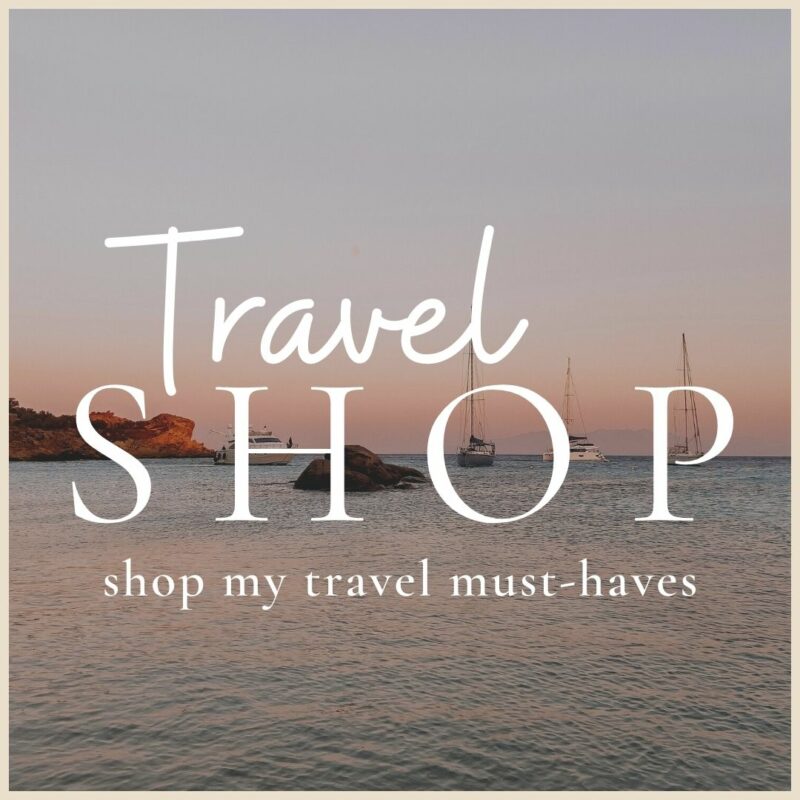 Sign up to receive emails from the Pocket Travel Edit, filled with luxury travel inspiration, destination highlights and exclusive discounts. Plus, get my FREE Edinburgh itinerary when you subscribe.