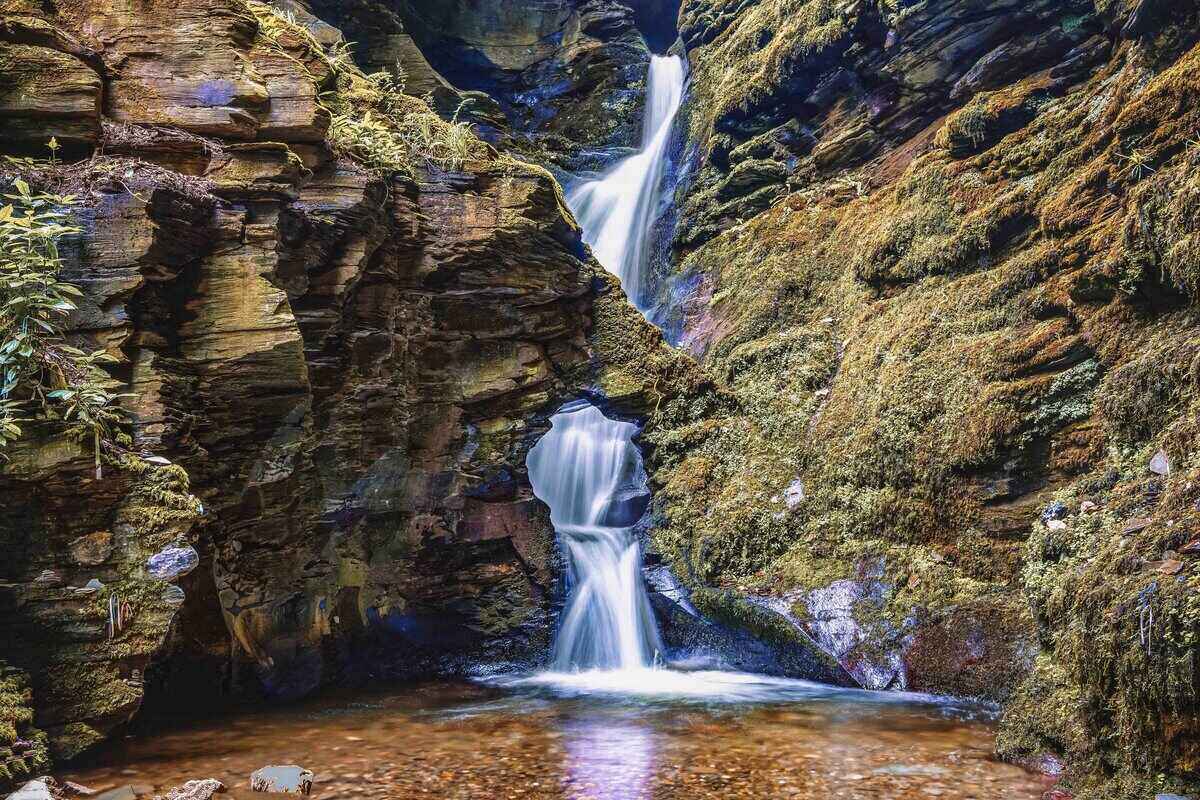 We think of Cornwall for its clotted cream, stunning coastline with outstanding surfing, its infamous pasties and of course its quaint fishing villages, beaches and striking countryside. But within this westernmost county, the waterfalls in Cornwall are another draw that will win over your heart.

Cornwall may not be famous for waterfalls, but I think this is only because of everything else it has to offer. The waterfalls in Cornwall are diverse, mesmerising and well worth a visit.

The waterfalls in Cornwall are scattered across the county, with some easier to reach than others. However, wherever you are staying, there’s almost certainly one within easy reach.

Even if you’re ‘just’ going to the county’s biggest tourist attraction – the Eden project – you’ll still be rewarded with a spectacular and captivating waterfall!

From gently tumbling falls in fairy-like ancient woodland to bursting cascading streams powering down cliffs, the waterfalls of Cornwall will have you enthralled.

Read on to find out more about the best waterfalls in Cornwall to visit. I’ve selected nine Cornish waterfalls to give you plenty of choice, wherever your base is.

Golitha Falls, part of the River Fowey, are perhaps the most well-known of the waterfalls in Cornwall. They are a series of babbling small falls and cascades found within Draynes Wood on the easily accessible southern edge of Bodmin Moor.

This popular beauty spot draws the crowds, but with very good reason. The River Fowey navigates its way through the spectacular ancient oak woodland on Bodmin Moor. It drops 90 metres over the course of the falls.

When you experience the Golitha Falls, you’ll witness a diverse range of ecosystems around the river. From sunlit glades to a steep craggy gorge, where most people focus their photography.

Golitha Falls is a National Nature Reserve (NNR) which is managed by English Nature as well as a Site of Special Scientific Interest (SSI). The River Fowey is an Area of Outstanding Natural Beauty (AONB). There’s good reason that Golitha Falls has racked up all these acronyms!

When to visit Golitha Falls

It’s always worth visiting the falls when they are at their most impressive – after heavy rains. Mid spring also beckons because the woodland floor is transformed with bluebells and wood anemone.

If you can come to Golitha Falls away from the summer crowds, sit along the river’s bank and be patient. You may be treated to an otter or two playing in the river bank.

The river is also home to salmon and sea trout. Other unusual wildlife makes the area around Golitha Falls its home, including a range of bats.

Reaching the falls is an easy half mile walk from a car park at Draynes Bridge, west of St Cleer. When you return to the car, there’s often a BBQ trailer here serving food and ice creams.

St Nectan’s Kieve feels like one of the most magical waterfalls you’ll ever experience. They have a mystical feel, not least because you’re in Tintagel country and in a place of spiritual pilgrimage. But because of the rock enclosed 20 foot deep plunge pool fed by the 60 foot high waterfall on the River Trevillet.

Without a doubt, this is a waterfall in North Cornwall that must feature on your itinerary. Indeed, St Nectan’s Kieve isn’t the only waterfall here in St Nectan’s Glen, so you’ll be amazed by what you find.

What’s most wonderful about St Nectan’s Kieve is the water has forced its way through the rocks, creating an arch which frames the falls. You’ll want to make sure you have plenty of time to wander in the ancient woodlands, perhaps wondering if you’ll glimpse a fairy or pixie! More likely, you’ll be surrounded by delightful birdsong.

Walking to the falls isn’t particularly hard, but it isn’t possible to navigate the path with a pushchair or wheelchair.

Another waterfall in North Cornwall that’s well worth a visit, especially if your holiday is centred in Newquay and you plan on exploring the area, is the little known fall at Tregardock Beach.

Tregardock Beach is found partway between Port Isaac and Tintagel. So if you’re in the area for some of Cornwall’s most famous sights, it’s worth a well-timed stop at Tregardock Beach.

You’ll have to walk a fair way to reach the beach. But this in itself is wonderful and keeps the crowds away. It has ensured that the area is largely unspoilt.

You need to time your visit for low tide (the beach pretty much doesn’t exist at high tide) and then walk to the northern end of the beach. Here there is a waterfall that tumbles over the rocks in front of a shallow cave.

The South West Coast Path is a mammoth walk that takes you 630 miles around the coast of Cornwall. However, there’s no rule that says you have to do it all!

One stretch which is well worth a trek is the section that passes through Rocky Valley. Here your feet will take you to gorges, canyons and impressive waterfalls.

This is another north Cornwall waterfall to discover, this time found between Boscastle and Tintagel. It’s a real testimony to geography in action as the river has worn through a fault-line in the slate, creating the gorges and falls.

If you haven’t heard of the Culm Coast, you aren’t alone. Despite its beauty, it’s a lesser known stretch of Cornish coast running from Bude to Hartland.

Again, it’s a feature of the South West Coast Path, and indeed has a reputation for being amongst the toughest of stretches. But if you’re reasonably fit it’s another section of the extended hike that I recommend if you want to see some of the best waterfalls in Cornwall.

As you walk along this stretch of the path, you’ll be rewarded with mind-blowing rock formations, tales of shipwrecks, beautiful valleys and, of course, waterfalls.

Perhaps the most impressive of these falls is the waterfall below St Catherine’s Tor. Another one worthy of pulling out your camera is the one at Spekes Hill Mouth.

Dropping down to the south Cornwall coast, a fabulous waterfall to visit is the Lansallos waterfall at Lantic Bay. Another area famed for its legends, this might be one of Cornwall’s smaller waterfalls. It is still well worth a visit, flowing into the Lantic Bay.

The waterfall here is found on the site of a former mill. There’s a slightly spine-chilling legend that a half-drowned man once sought refuge at the mill searching for help.

Unfortunately, the wretched man was refused help by the miller’s wife and the man met his untimely end outside. Consequently, the scorned man thus haunted the mill ousting the couple who were driven to move away!

Close to the the port town of Fowey, the River Fowey is also one of the best places to go paddleboarding in Conrwall.

Visiting the Eden Project is a must-do, at least once when you are visiting Cornwall. It’s definitely one for your UK bucket list.

Found in Bodleva, near St Austell, the Eden Project is Cornwall’s most-visited attraction. People come to witness the biodiversity, from rainforests to deserts in the enormous biomes that are striking just by themselves.

One of the biomes supports a tropical rainforest and what do you need for rainforests? That’s right – water, and lots of it. Part of the water system in this tropical dome is a mighty waterfall.

Balance along the wobbly rope bridge and be amazed at the exotic waterfall that you’ll find. You may even find some roul-roul partridges free-roaming nearby and you’ll definitely feel more like you’re in Malaysia than Cornwall!

Pentargon waterfall seems to be another of the waterfalls in Cornwall that is little known about but definitely worth a visit. The water here tumbles down 100+ feet, making an impressive display in this stunning hanging valley, plunging over the cliff to meet the sea below.

Don’t just get drawn to this Cornish beach on a hot summer’s day, come after heavy rainfall if you want to experience the waterfall at its best. You can walk up from Boscastle harbour until you reach Penally Point before following the coastline to a natural viewpoint for the falls.

If you’ve visited the rainforest waterfall at the Eden Project but want to see something of Cornwall’s own natural and historical landscape, then you can find the Luxulyan Valley and its falls between St Austell and St Blazey.

The falls here are on the Par River, in an area renowned for mining. The beautiful woodlands hide the remains of the mining landscape, including leats that were used for carrying water. One of the biggest things you can find is the striking ten arch Treffry viaduct which looms 100 feet above you.

Around this, the valley has formed and a waterfall has come alive around the disused waterwheel system. It’s something of a hidden gem but well worth discovering.


Make sure that waterfalls in Cornwall feature on your trip plans and you’ll feel inspired and amazed at another type of beauty that Cornwall can add to its accolades.

Want more Cornwall inspiration? Discover my pick of the best towns in Cornwall for a UK staycation, browse my favourite luxury hotels in Cornwall or find the best spa breaks in Cornwall.