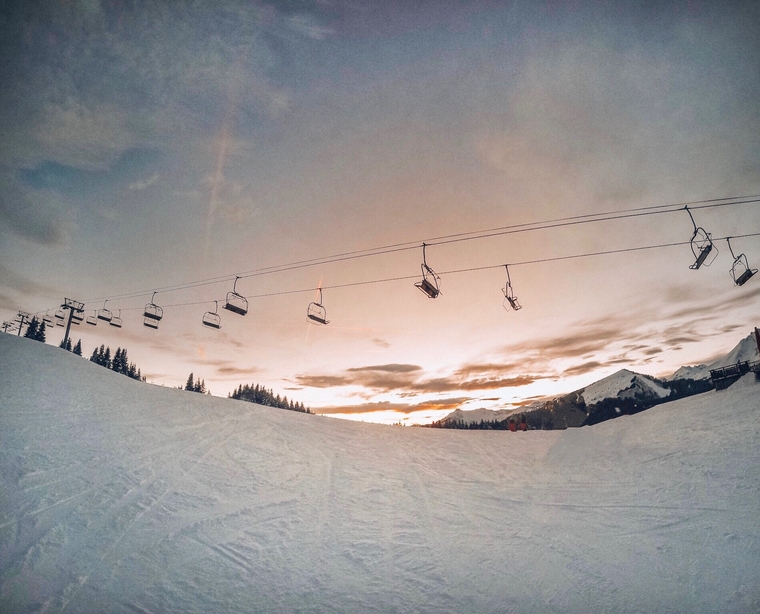 You may have seen from my recent post that I spent a week staying in Morzine with Chilly Powder. We spent our days whizzing down slopes, gorging ourselves on amazing food and sometimes going a bit too hard at après.

As if the buzz and adrenaline of skiing wasn’t enough, we thought it a good idea to throw in some additional activities. One of the best bits about ski holidays is that you don’t have to just ski. From paragliding to fat biking, there are loads of options for the adventure seekers.

The first was night tobogganing in Morzine and I’m not sure we realised what we’d got ourselves in for. I quickly learnt that you should only go night tobogganing if you have a death wish (but also want to have a lot of fun!). A large group of us trundled up to the start of the route, where a beautiful sunset greeted us while we psyched ourselves up for the ride ahead.

At this point, we were feeling pretty confident. That was until I turned around to see an ambulance man with a stretcher, there to follow us down and pick up the fallen…

A few selfies later and we all released the brakes to start making our way down the piste. That first stretch was carnage! Sledges in all directions, nobody in control of the piece of plastic underneath them and people flying off every which way. Screams and laughter echoed loudly and everyone collided with everyone.

It was absolutely hilarious. But I did wonder how on earth we’d all make it down to the bottom. We had a long way to go and we’d all fallen at the first hurdle. We continued our rather treacherous journey in which the instructor would periodically say ‘try not to go too far left or you’ll fall into the ravine’. Words you don’t want to hear when you’re still struggling with the basics of steering.

An hour of seriously sketchy tobogganing in pitch black later and we made it to the bottom with only one stretcher victim. I’m almost certain there were less people at the end than there were at the start but let’s not dwell on that too much…

Despite some questionable health and safety, I’d highly recommend night tobogganing to anyone looking for some after-dark thrill seeking. Just make sure you wear a helmet.

As if the drama of night tobogganing wasn’t enough, we wanted one final adrenaline kick before heading back. On recommendation from one of the staff at the chalet we stayed at, we decided to try zip-lining across one of the valleys in Avoriaz.

We arrived just before it opened at 12pm and got suited and booted in the harness. You go down head first with your hands behind your back – like superman but without the outstretched arm.

As zip-wires go, it’s not particularly fast and is more of a leisurely glide. It’s actually quite good because you get to take in the stunning views.

My biggest fear was getting stuck in the middle and being left to dangle until someone could rescue me. I can confirm that did not happen and we all made it to the other side with no hiccups. They send your skis down in a bag after you, so once you arrive at the other side you can just ski off.

All in all, not as scary as it looks and you get to fly across a valley which is pretty cool. Just make sure you save it for a bluebird day, as it won’t be open on snowy, windy or cloudy days.